The Pittsburgh Penguins have recalled forward Jake Guentzel from Wilkes-Barre/Scranton of the American Hockey League, it was announced today by executive vice president and general manager Jim Rutherford.

Forward Chris Kunitz has been placed on injured reserve.

Guentzel, 22, has been one of the top offensive threats in the AHL this year, ranking third (tied) overall in the league, and first among rookies, with 17 points (7G-10A) in 16 games. His plus-14 leads the AHL.

The 5-foot-11, 180-pound Guentzel had three points (1G-2A) on Saturday night in the WBS Penguins’ 4-3 comeback win against Hershey. Guentzel set up both the tying goal with 1:04 remaining in regulation and the overtime winner by Carter Rowney. 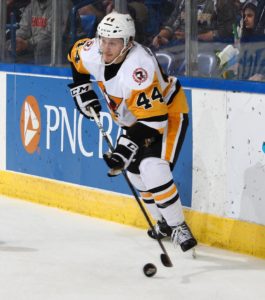 A native of Omaha, Nebraska, Guentzel burst onto the professional scene with WBS at the end of last season following the end of his junior year at the University of Nebraska-Omaha. He had six points (2G-4A) in 11 AHL regular-season games, before notching 14 points (5G-9A) in just 10 playoff contests, with his 1.40 points per game average the top figure among all AHL players. Guentzel’s nine assists led AHL rookies.
Pittsburgh’s third round (77th overall) selection in 2013, Guentzel enjoyed a successful three-year career at UNO, leading the team in scoring each of his final two years, including last season when he ranked 10th in the nation with a 1.31 points per game average.

Guentzel finished his college career with 119 points (40G-79A) in 108 games. He was named to the National Collegiate Hockey Association All-Rookie Team in 2013-14.

During his lone season with Sioux City of the United States Hockey League (USHL) in 2012-13, he took home Rookie of the Year honors and was chosen to both the All-Rookie Team and the Second-Team All-Star squad.