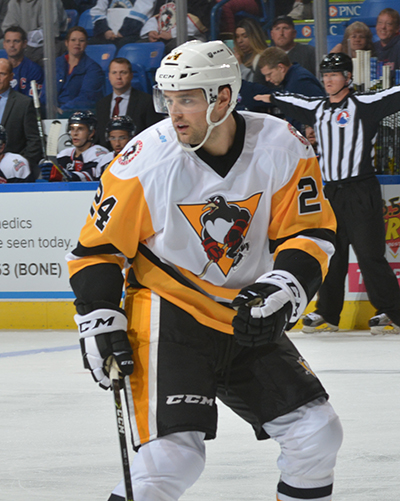 The Pittsburgh Penguins have re-assigned defenseman Cameron Gaunce to the Wilkes-Barre/Scranton Penguins of the American Hockey League, it was announced today by executive vice president and general manager Jim Rutherford.

Gaunce, 26, made his Pittsburgh debut on January 18 at Montreal, recording an assist.  In three games with the NHL Penguins, Gaunce produced two assists and a plus-3 rating with four penalty minutes.

The 6-foot-1, 210-pound native of Sudbury, Ontario was signed by the Penguins as a free agent this past summer, and has played in 23 career NHL games split between the Penguins, Colorado Avalanche and Dallas Stars, scoring three points (1+2).  His lone goal came against Marc-Andre Fleury and the Penguins on February 16, 2011 when he skated for the Avalanche.

Last season, Gaunce was named to the AHL All-Star Game after posting career highs in assists (35) and points (37) with Portland.  During the 2014 playoffs, he helped the Texas Stars win the Calder Cup championship.

Wilkes-Barre/Scranton’s next game is tomorrow, Wednesday, Jan. 25, against the Syracuse Crunch at Mohegan Sun Arena at Casey Plaza. Puck drop between the Penguins and Crunch is scheduled for   7:05 p.m.

Individual game tickets for tomorrow’s game and all Penguins home games are available at the Mohegan Sun Arena box office, online at TicketMaster.com, or by calling 800-745-3000.