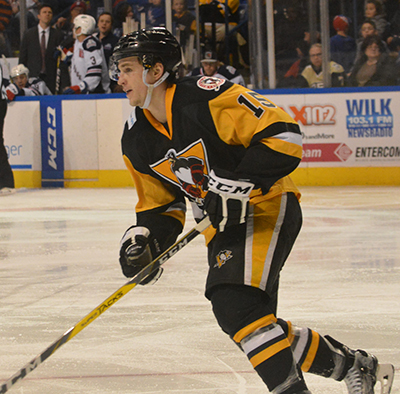 The Pittsburgh Penguins have recalled forward Josh Archibald from Wilkes-Barre/Scranton of the American Hockey League, it was announced today by executive vice president and general manager Jim Rutherford.

Archibald, 24, scored his 14th goal of the season and added an assist in a 3-2 WBS win against Providence on Saturday night. Those points improved his season totals to 14 goals, 13 assists and 27 points in 57 AHL contests. He had goals in three of his last five games.

The 5-foot-10, 176-pound Archibald is a plus-26 on the season, a total that ranks second on the team, tied for third in the entire AHL, and first among all AHL forwards.

Archibald scored his first two NHL goals, including one shorthanded, on Feb. 11 at Arizona. He has skated in two NHL games this year, and one last year, his NHL debut against the Flames on March 5, 2016 at PPG Paints Arena.

Wilkes-Barre/Scranton plays a home-and-home series against the Lehigh Valley Phantoms this weekend.  The teams will face off Friday night in Allentown before meeting again on Saturday night in Wilkes-Barre.

Saturday night is the Penguins annual St. Patrick’s Day celebration, where the team will be wearing special shamrock sweaters which will be auction off during the game.

Tickets for Saturday night’s game are on sale now at the Mohegan Sun Arena box office, online at TicketMaster.com, or by calling the Penguins at 570-208-7367.