Teddy Blueger joined the Wilkes-Barre/Scranton Penguins late last season after his college career came to a close. In the 20 games he played, he acclimated himself more than adequately with his responsible two-way game, but posted just one point in that time.

When he returned from a training camp injury to start his first full professional season, more of the same was expected from Blueger: stout defensive play, reliable penalty killing, modest offensive output.

He lived up to the first two of those expectations.

He absolutely crushed the third one.

“I was hoping to be a little more productive than last year,” Blueger said. “I don’t really think numbers always tell the whole story, so I don’t base my game on that. But it was nice to be able to contribute that way.”

His increased offense surely kept the higher-ups in the Penguins organization smiling, but it clearly turned heads back in his home country, too. 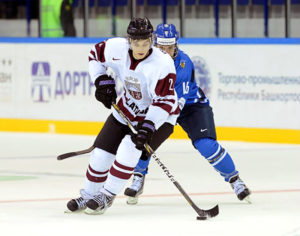 Not long after Wilkes-Barre/Scranton’s season came to a close, the Latvian national team came calling. Blueger will spend the first few weeks of his offseason representing his home country at the IIHF World Championships.

He’s worn sweaters adorning the Latvian coat of arms multiple times before at lower level events, but this is the first time the honor comes on such a large stage.

Blueger (who will be playing under his given name, Teodors Bļugers,) hopes to use the forward steps he took this season in the AHL and apply them to his upcoming international hockey experience.

“I learned a lot this year,” Blueger said. “I enjoyed being given the chance to play in all situations. Even strength, P.K., power play, all that stuff. It was a great experience for me.”

Blueger’s bench boss with the Penguins, Clark Donatelli, reinforced those beliefs that the rookie centerman made the most of any new opportunities presented to him.

“I think he exceeded all expectations, of all of us, in terms of how he was going to do,” Donatelli said. “Teddy put the work in and got the results. Then the more we gave him, the more he took. When he was handed more responsibilities, he ate it up. He had a great year.”

Latvia’s tournament begins on Saturday, May 6 when it takes on Denmark in its first game of the preliminary round. Blueger and his fellow countrymen will face even tougher competition after that, being as Latvia occupies the same group as hockey powerhouses Sweden, Russia and the United States. Blueger’s first country will take on his adopted home on Saturday, May 13.

Regardless of how far the 12th-seeded Latvia goes in the tournament, Blueger won’t be off the ice for long afterwards. Always one of the last players to leave practice during the season for Wilkes-Barre/Scranton, the Latvian rink rat wants to focus on refining his skills even more before next year.

“The biggest thing for me is my speed and explosiveness,” Blueger said. “If I could get a little bit quicker, I think that would go a long way for me in today’s game.”