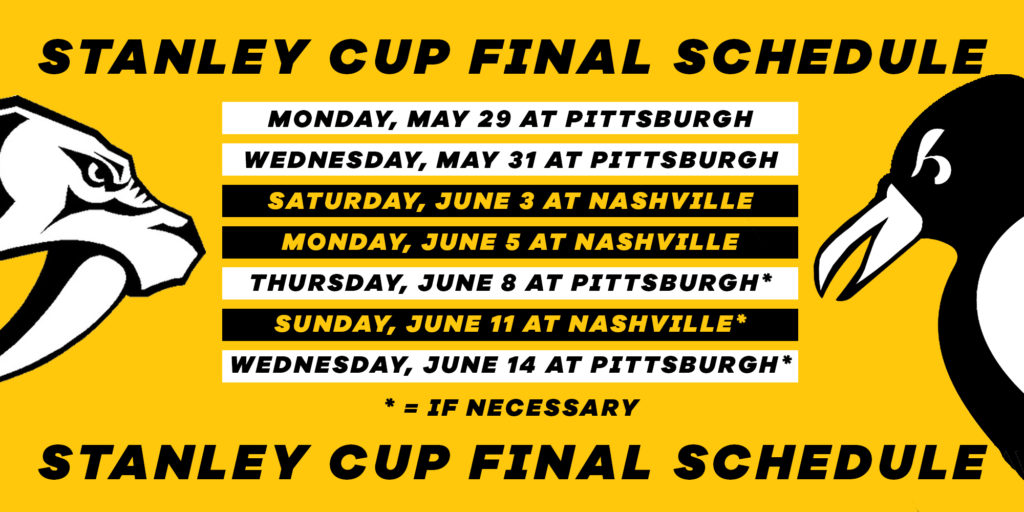 The Pittsburgh Penguins are headed the Stanley Cup Final for the second straight season, following Thursday night’s 3-2, double overtime win over the Ottawa Senators in Game Seven of the Eastern Conference Final.  The Penguins will meet the Nashville Predators in the National Hockey League’s championship series starting on Monday night.

The full schedule for the Stanley Cup Final is below.  All times are to be determined:

Former Wilkes-Barre/Scranton Penguins head coach Mike Sullivan, who guided Pittsburgh to the team’s fourth title last season, is looking to join an exclusive coaching club this spring.  Sullivan can become just the second head coach in NHL history to win the Stanley Cup in his first two seasons behind the bench, joining the legendary Toe Blake, who accomplished the feat with the Montreal Canadiens in 1956 and 1957.  He also won the Cup with the Habs in each of the following three seasons as well.

Season Ticket Memberships for the 2017-18 Wilkes-Barre/Scranton Penguins season are on sale now.  Call the Penguins directly at 570-208-7367 to get yours, or fill in the form below, and a Penguins account executive will reach out to you.
Tags: AHL, American Hockey League, Hockey, Nashville Predators, National Hockey League, NHL, Pittsburgh Penguins, Wilkes-Barre/Scranton Penguins