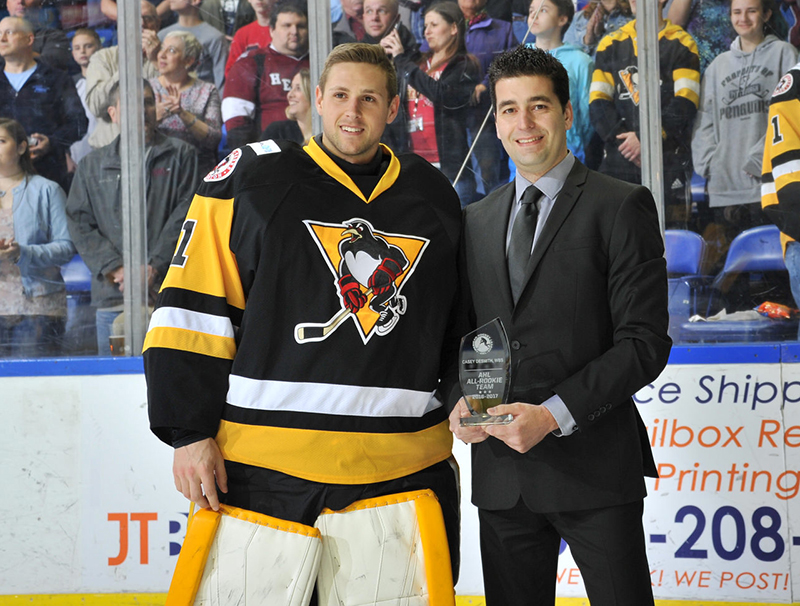 When Casey DeSmith wasn’t stopping pucks on the ice this past season, he often found himself dodging playful jokes from his teammates in the Wilkes-Barre/Scranton Penguins locker room. It wasn’t an everyday occurrence, but all too frequently, someone would deliver DeSmith an insult regarding his car.

For a pro athlete, DeSmith drives modestly. He arrived at the rink every day in a gold 1998 Toyota Celica, a vehicle with a burnt-out taillight as well as the grit and character of a veteran fourth-liner.  Affectionately known as “The Golden Snitch” in some circles, it was the low hanging fruit, perfectly ripe for his teammates to pick.

DeSmith probably got it so hard from his teammates about his obsolescent automobile because there was little else they could tease him about, especially when it came to his play on the ice. One season after his sudden and shocking ascent from being a third-string goalie in the ECHL to the Penguins playoff starter, DeSmith picked up right where he left off for his first full AHL campaign.

Day in and day out, game after game, he was a dominant force between the pipes. That kind of consistency lent itself to one of the best rookie seasons a goalie has ever had in Wilkes-Barre/Scranton Penguins history. Not only did his gaudy statistics earn him a series of individual accolades, but his year culminated in the once undrafted DeSmith signing his first NHL contact on July 1.

“A personal goal that I set was just not necessarily to sign an NHL contract, but having a year to give me the possibility or opportunity to do that,” he said. “I’m glad that I was able to do that, and obviously it’s super exciting.”

An NHL contract wasn’t the only goal DeSmith set for himself at the start of the 2016-17 season, though. He came right into camp with the motivation to prove that his unpredictable playoff success the spring before was no fluke.

“That was important for me,” DeSmith said. “Obviously, the year before I didn’t have a ton of playing time or exposure or anything like that. So I definitely made the most of what I had. But this year, I knew I would have more of an opportunity to prove myself, and I wanted to take advantage of it.”

That’s exactly what he did. The coaching staff and his teammates, already familiar with his wizardry from the previous playoffs, grew to trust him even more. Just because the Penguins didn’t have their A-plus game on a given night, that didn’t mean their chances of victory were sunk. Just because Tristan Jarry wasn’t in net, it didn’t mean the Penguins would have a “back-up goalie mentality” when the other guy went in. Because the other guy was Casey DeSmith.

The rest of the league took notice of DeSmith, too.

Before the season’s end, he was named to the AHL’s 2016-17 All-Rookie Team. Once the season concluded, he and Tristan Jarry stood tall as statistically the best netminding tandem in the league, earning them the Harry “Hap” Holmes Award given annually to the goalie(s) with the fewest goals against at the end of the season.

With the playoffs gearing up at that stage of the year, DeSmith wasn’t really in the state of mind to appreciate the weight of the individual accolades he had received. However, when he returned home for the summer, he took the awards that were stashed in the back of the good ol’ Golden Snitch and handed them over to his mom and dad. It was in that moment that the reality of his accomplishments sunk in.

“I took them out and showed my parents, and you kind of realize how cool it is to get an award for All-Rookie Team or lowest goals against average as a tandem,” he said. “That’s not easy to do. [All-Rookie Team] is something only one goalie gets a year. One tandem as far as the Holmes award. It was handing those trophies to my parents and being like, ‘Man, this was a really good year.’”

DeSmith’s banner year didn’t end with Wilkes-Barre/Scranton’s season, though. On the first day of NHL free agency, the Pittsburgh Penguins inked him to a one-year, two-way contract.

“Excitement” is the emotion DeSmith cites most often when he thinks back to the day he put pen to paper, making the deal official. But he doesn’t dwell too much on what he’s already done. He’s already prepared to move forward and forge another unforgettable year like the one he just had.

“As a competitive athlete, it’s not enough,” he said. “You want to win the Stanley Cup. That’s the ultimate goal. So, it’s like a step in the right direction, rather than ‘Oh, I reached my goal. This is the top’. This doesn’t feel like the top of the mountain. This is another step in my climb to where I want to be.”

While DeSmith has his eyes on a greater prize as he continues to work to advance his career, certainly he had to celebrate the gigantic season and big contract signing in some fashion. And he did. After signing his first NHL contract, DeSmith went out and bought himself a new car.

Even though he’ll be traveling in style from now on, DeSmith isn’t so sure anyone will let him forget about his old ride anytime soon.

“You know, I might still hear about the gold car from time to time. But at least I won’t be driving to the rink in that anymore.”