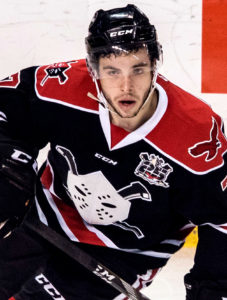 WILKES-BARRE, Pa. – The Wilkes-Barre/Scranton Penguins announced today that they have signed forward Gage Quinney to an American Hockey League contract for the 2017-18 season.

Quinney spent his first season as a pro last year playing for the Penguins’ ECHL affiliate, the Wheeling Nailers, where he notched 44 points (18G-26A) in 45 games. He earned his first career point in Wheeling’s second game of the season on Oct. 20 against Reading, and netted his first pro goal two games later on Oct. 28 at Kalamazoo. He scored his first career hat trick on Mar. 15 at Elmira.

Quinney recorded three or more points on five different occasions, tied with Nick Sorkin for the most on the Nailers.

The Las Vegas, Nevada native played three seasons in the Western Hockey League before turning pro. He earned 119 points (53G-66A) in 182 games with the Prince Albert Raiders, Kelowna Rockets and Kamloops Blazers. Quinney was also a member of the 2014-15 Kelowna squad that captured the Ed Chynoweth Cup as WHL champions.

Quinney and the Penguins will open their next season on Oct. 7 against the Charlotte Checkers at Mohegan Sun Arena at Casey Plaza. Season ticket packages for the 2017-18 season of Wilkes-Barre/Scranton Penguins hockey, including full season, 22-game, 12-game and Flexbook plans, are available by contacting the Penguins directly at (570) 208-7367.