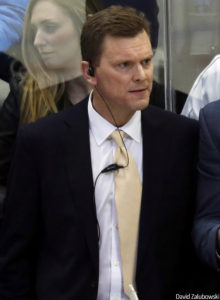 WILKES-BARRE, Pa. – The Wilkes-Barre/Scranton Penguins announced three additions to their hockey operations staff for the 2017-18 season. Tim Army has been named an assistant coach, joining head coach Clark Donatelli and fellow assistant J.D. Forrest behind the Penguins’ bench. Additionally, Seamus McKelvey has been named Head Athletic Trainer, and Mike Joyce has been hired as the team’s Strength and Conditioning Coach.

Army, 54, joins the Penguins with 29 years of coaching experience in the NHL, AHL and NCAA, most recently spending the past seven seasons serving as an assistant coach with the Colorado Avalanche. The Providence,  Rhode Island native spent three seasons (2002-2005) as head coach of the Portland Pirates of the AHL, compiling a 99-89-26-6 record in 240 games. He then went on to spend six seasons as head coach of his hometown Providence College Friars from 2005-2011.

Throughout his career, Army has served as a coach for USA Hockey, including winning the bronze medal twice with the U.S. National Team at the 1996 and 2013 IIHF World Championships. He also guided the U-18 Team at the 2010 Ivan Hlinka Memorial Cup to a second place finish.

Before his coaching tenure, Army played one season in the AHL with the Maine Mariners, recording 27 points (11G-16A) in 68 games during the 1985-86 campaign. He was also a four-year letterman (1981-85) at Providence College, serving as the Friars captain during his senior season.  He was a Hobey Baker Award Finalist and the first recipient of the Hockey East Scoring Champion Award in 1985.

Joyce, originally from Scranton, Pennsylvania, graduated from Marywood University in 2017 with a bachelor’s degree in exercise science and a minor in nutrition. He spent the last year assisting the Penguins as an intern under the tutelage of former strength coach, Doug Davidson. Joyce is also a certified U.S.A. Weightlifting Sports Performance Coach.

The Penguins will open their next season on Oct. 7 against the Charlotte Checkers at Mohegan Sun Arena at Casey Plaza. Season ticket packages for the 2017-18 season of Wilkes-Barre/Scranton Penguins hockey, including full season, 22-game, 12-game and Flexbook plans, are available by contacting the Penguins directly at (570) 208-7367.

PINK IN THE RINK THIS WEEKEND WITH THE PENGUINS