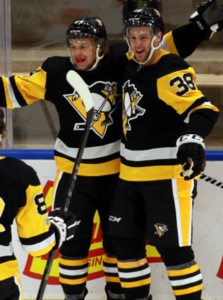 Despite their opponents boasting arguably more attractive depth charts, the Penguins organization proved its dominance once again with its tremendous showing at the Prospects Challenge. The efforts of the scouts, coaches, and most importantly the players culminated in a 5-3 victory in the final game against the Buffalo Sabres on Monday.

“This group was pretty special because we didn’t have too many practices,” said coach Clark Donatelli. “We showed them some video, we told them what to do, and they responded. They played really well. I think it gets contagious once they know they have success doing it, they want to do it more.”

Donatelli went on and spoke at length about the organizations philosophy when it comes to not just drafting and signing good players, but “good humans”, as he put it. There is an added emphasis on work ethic, too, and when those personalites all combine in one space, unique things can happen.

“When people come to us, they want to get better,” Donatelli said. “Every single person works so hard on the ice and off the ice. When you’re working in that kind of environment and you have people around you that are willing to pay the price to win and pay attention to details and practice habits, it’s contagious. Fortunately for us right now, that’s our culture. It’s a tribute to the organization and how they draft players.

New assistant coach Tim Army has only been part of the family for a hot second, being hired by Wilkes-Barre/Scranton one month ago. However, he now has first-hand experience with what the Penguins organization is capable of, even when they have limited resources at the draft.

“I think the evaluation of players and brining in the right group is a credit to all of the scouting staff,” Army said. “You know, they get out there and they watch a lot of games. They’re all over North America and they’re all over Europe. We have some draft picks here, but there are also some unsigned players that are really battling. They bring in the right pieces.” 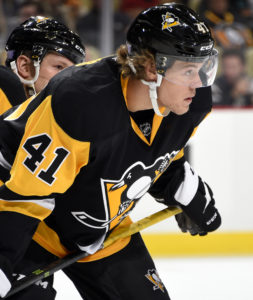 Those scouts found Teddy Blueger, who wore the “C” as a young leader on this team and was a beacon of light on defense.

Those scouts found Daniel Sprong, whose constant threat of offense kept opposing teams on their heels.

Those scouts found Jordy Bellerive, and undrafted, unsigned 18-year-old who ended up topping the tournament with seven total points (4G-3A) in three games.

Those scouts scoured the globe and found Slovenian Jan Drozg, who unloaded a wicked wrist shot on the rush for what became the game-winning and tournament-winning goal.

The Sabres opened the scoring with a first period power play goal by Brendan Guhle. The rowdy crowd at HARBORCenter thought that the hometown Buffalo squad would carry that 1-0 lead into the first intermission until Thomas Di Pauli slammed home a rebound in the waning seconds of the frame.

The second period was a back and forth affair, with the two teams trading goals in quick succession. Zach Aston-Reese made it 2-1 for the Penguins prospects with a goal on a five-on-three man advantage, but Buffalo’s Justin Bailey answered back with another power play marker. Antti Palojärvi, who checked in to the Penguins’ line-up for the first time on Monday, got the black and gold back on top, 3-2, before Buffalo’s third power play goal of the night (this time from C.J. Smith) evened things up again.

Drozg found his game-winner midway through the third, and then Zach Aston-Reese sealed it off with an empty netter.

They didn’t walk away with a trophy or gold medals or anything like that, but with the work put in by everyone with the Penguins this weekend, the organization showed its counterparts why its considered the best there is.

“There’s an expectation of winning here,” Army said. “And we told that to the guys before we bused out. We’re about winning here, so let’s go win a tournament. Well, we won the tournament.”

HOLIDAY DEALS THIS WEEK WITH THE PENGUINS