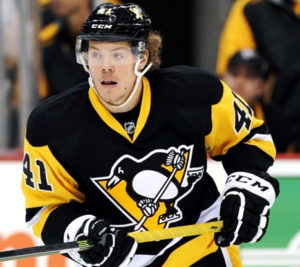 Sprong has continued to generate offense in bunches since the Pittsburgh Penguins drafted him in the second round of the 2015 NHL Entry Draft.  But now they’re looking for him to find a new trick: they want him to learn how to play defense.

The oft-cited but always elusive “200-foot game” is what Sprong is focused on achieving these days. Last year, after shoulder surgery denied him the first few months of the season, Sprong used his time back with the Charlottetown Islanders of the Québec Major Junior Hockey League to not only score many more goals, but to work on rounding out the defensive aspects of his skillset.

“I had good teammates and good coaches that helped me out with my 200-foot game in the Q last year, and I think my plus/minus showed it,” Sprong said. “And these games at [the 2017 Prospect Challenge], each game got better and better. It’s never going to be perfect at this time of year, but I’m making progress and getting closer to where I need to be.”

It’s hasn’t been an overnight adjustment for Sprong, largely because his game has been predicated on generating offense his entire life. And when he looks at the roster of the NHL team that drafted him, there’s plenty of existing offensive firepower with the likes of Sidney Crosby, Evgeni Malkin, Phil Kessel and Jake Guentzel to name a few. So Sprong feels the pressure to demonstrate his worth amongst a crowded field of competition.

“Pittsburgh has a lot of scoring depth and me being an offensive guy, of course I have to worry about creating chances every time I’m on the ice to prove myself,” Sprong said.

That creates quite a mental paradox for a young player. On one hand, you want to do the one thing you’ve done your whole life, while the people in charge of you want you to do the opposite. Instead of being overwhelmed by it all, Sprong has welcomed this challenge with open arms.

Furthermore, Wilkes-Barre/Scranton assistant coach Tim Army says that Sprong is far from the first player to go through that conundrum.

“That’s the pressure of this immense offensive potential and ability,” Army said. “But then it’s about the process of players learning how to best take advantage of that ability. The only way you can take advantage of it, is being diligent without the puck in all three zones. Pro hockey’s too difficult, it’s too humbling. If you’re not diligent off the puck, you’ll quickly find you’ll dry up offensively, too.”

A young offensive stud isn’t exactly accustomed to playing off the puck all that often, though. Sprong has been the go-to guy for his teams to drive the play shift after shift. Now that he’s starting from scratch and isn’t going to always be in those same situations, well, that’s the current learning curve he’s on right now.

“That’s just all part of being a pro,” coach Clark Donatelli said. “Those offensive players, especially coming out of juniors, their defense IS having the puck. Now when you try moving up, you might have the puck less, so you have to adapt your game. He’s such a high talent that he’ll figure it out.”

Sprong is also far from the first player to go through these growing pains. Donatelli and Wilkes-Barre/Scranton GM Bill Guerin both used the phrase “superstars” when talking about the game’s history of offensive players thriving once they learned how to effectively play defense. Army, on the other hand, had more specific examples.

“I think back to all those years ago when I was in Anaheim, and we drafted Paul Kariya,” he said. “And then when we traded for Teemu (Selänne). They were really young guys at that time. They obviously had brilliant offensive ability, but to learn the game from an away from the puck vantage point, it took some time.Eventually, by them playing, and you being patient with them and instructing them, they begin to figure it out.”

Now, both Kariya and Selänne are Hall of Fame bound.

That’s not to say Sprong is destined for Younge Street, but those two names provide a perfect example of what his career could be if he harnesses the power of the mythical 200-foot game. Only then can he truly reach the skyscraper high ceiling of his offensive talents. More goals for Daniel Sprong. Though he’s probably used to hearing that at this point.