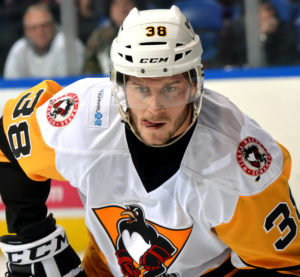 Based on the way Thomas Di Pauli’s first season as a pro went last year, it’d be easy to think he spent most of his days spilling salt over broken mirrors underneath a ladder with a black cat. It was a rather unfortunate year to say the least, one riddled with injuries.

First it was a knee ailment suffered during training camp. Then once he got healthy, a nagging issue in his back required surgery to fix. That ultimately sidelined him for three whole months. Finally, a slash cut him right back down with a broken finger that ended his season for good. After all of that, the promising two-way forward was limited to just 21 games.

Bad luck like that would give anyone a good reason to mope around and curse the heavens, but at the recent Prospects Challenge in Buffalo, New York, not even the Karate Kid could wax the smile off of Di Pauli’s face.

Grinning ear-to-ear after every game, the Italian-born 23-year-old couldn’t contain his excitement when talking about his healthy status. By the time the tournament was over, Di Pauli had one word to describe how he felt.

“I feel strong, I feel fast, and I feel confidence,” Di Pauli said following the Penguins prospects’ title-clinching game against the Buffalo Sabres. “I guess I’m going to keep having fun, because right now the hockey is flowing and it’s been so fun to play.”

Di Pauli spent most of his summer altering his training regimen and his diet. Di Pauli cited the time he spent observing Penguins veterans like Tom Kostopoulos as a huge inspiration for him when he was sidelined, and for good reason. Not only does Kostopoulos still produce offense in his late 30’s, but he’s only missed one game due to injury over the past two seasons.

Di Pauli hasn’t altered his eating habits to completely mirror the gluten-free lifestyle of his captain, but he is now a pescetarian. In the gym, he’s placed an added emphasis on flexibility and mobility over strength, attempting to ensure that his body can better handle the rigors of pro hockey.

Everything the oft-injured rookie changed from last year to now is a direct result of his misfortune.

“I learned from it,” he said. “I had the whole summer to regroup and focus on this year. I’m a firm believer that when things like that happen, it can make you stronger. I’m trying to look at it as a positive.” 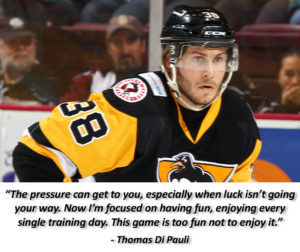 The changes he’s made off the ice appear to be already translating to his on-ice performance, as well.

“Now [Di Pauli]’s healthy, and you can see the difference,” said Wilkes-Barre/Scranton Penguins head coach Clark Donatelli. “You can see he’s got more jump. He’s a little bit quicker, and he’s a quick player to begin with.”

With his health in check, Di Pauli has his sights set on making a big impact with the Wilkes-Barre/Scranton Penguins. Technically, because he was robbed of so many games last year due to all of his miscellaneous setbacks, he still qualifies as a rookie by American Hockey League standards. That puts him right in the mix with Wilkes-Barre/Scranton’s expected and anticipated rookie class, including Zach Aston-Reese, Daniel Sprong and Adam Johnson.

Despite being existing in a crowded field not only of rookies, but the Penguins organization’s overall depth chart at forward, a healthy Thomas Di Pauli has his sights set on reaching the NHL. Soon.

“I know the player I am and I’ve always known the player I can be,” Di Pauli said. “I won’t be surprised if I’m playing [in Pittsburgh] sooner rather than later. I know I can make that jump. So I’m going to keep hammering away, paying my dues and having fun, because I’m confident that I can play there.”