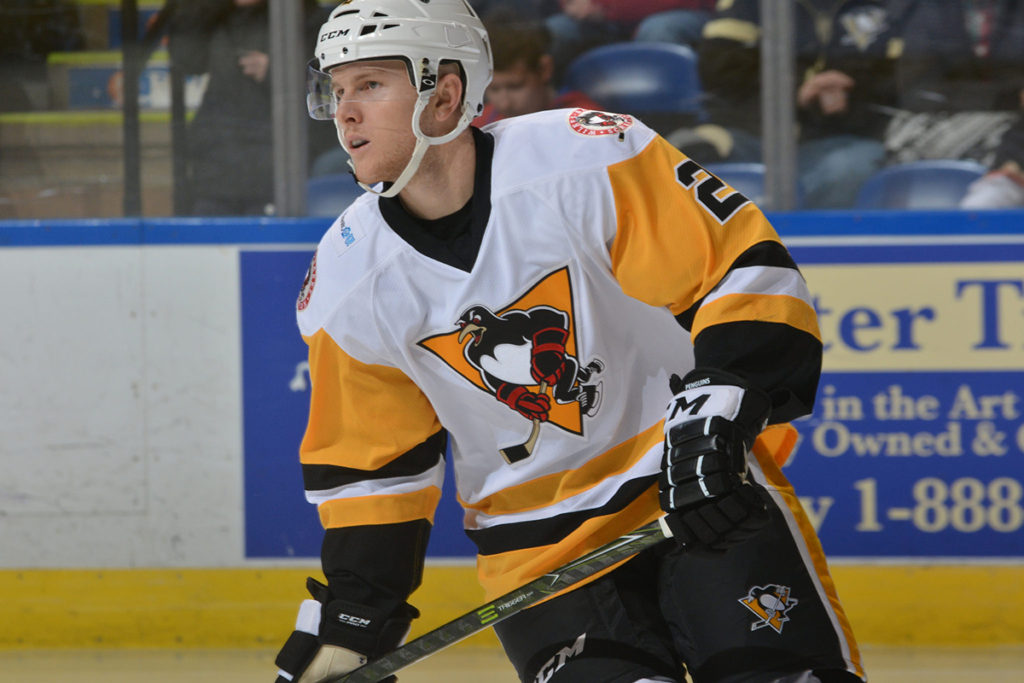 It can be a daunting choice, one to which most everyone can relate.  At some point in life, it comes time to mull over a job offer.  Many hours and some sleepless nights are spent weighing the pros and cons, determining if the next opportunity is the right one.

Hockey players go through a super-charged version of this process come the start of free agency each summer.  Life decisions are crammed into a few hours as players must quickly choose which contract, which organization, which city is the best fit.

Even if defenseman Chad Ruhwedel had a crystal ball at his disposal last summer when he signed a one-year deal with the Pittsburgh Penguins, he might have had difficulty foreseeing the path the lay ahead.

Ruhwedel had been at this crossroads before.

The San Diego native had an outstanding junior campaign at the UMass-Lowell, helping the Riverhawks to the Frozen Four while being named an All-American.

At the same time, the undrafted defenseman was being pursued aggressively by the Buffalo Sabres, who signed Ruhwedel at the conclusion of the 2012-13 college season.  He hopped right into the Sabres line-up, making his NHL debut on Apr. 13, 2013 in a 1-0 win over Philadelphia as part of a seven-game stint with Buffalo.

The following season, Ruhwedel’s first full campaign as a pro, would provide the blueliner with a highwater mark for games played in the NHL.  He appeared in 21 contests for a rebuilding Buffalo squad, while also splitting time in the American Hockey League with the Rochester Americans.

A restricted free agent in the summer of 2014, Ruhwedel re-signed with the Sabres, but saw his time in NHL diminish to just five games in Buffalo over the next two seasons.

Fast forward to July 1, 2016.  Ruhwedel was at another proverbial fork in the road. Though there were many conversations with his family and agent leading up to the start of free agency, the final decision ended up being a pretty easy one.

“That was pretty hectic the week before free agency.  We narrowed it down to a few contenders,” Ruhwedel stated.  “When Pittsburgh’s name came up, to be honest, it was a no-brainer.”

The 27-year-old joined a Penguins organization that boasted a very deep bench on defense.  He began the season in Wilkes-Barre/Scranton and immediately slotted into the top pairing for the AHL club.

When injuries befell the blueline corps in Pittsburgh near Christmas time, Ruhwedel was recalled to NHL.  He hit the ice for his first game with Pittsburgh on Dec. 20, and scored his first NHL goal a game later versus the New Jersey Devils.  His steady play endeared Ruhwedel to the coaching staff in a short amount of time.

“The reason Chad stuck is because he earned his spot,” said Pittsburgh Penguins Head Coach Mike Sullivan. “He earned it through his performance and his work habits each and every day.”

Ruhwedel set career highs with 34 NHL games played, two goals, eight assists and 10 points.  Those stats and time spent in Pittsburgh probably would have been enough to justify his choice to join the Penguins, but it only got better from there.

With the defense corps at full health to begin the postseason, Ruhwedel initially found himself a spectator through the opening round series versus Columbus and much the second round against Washington.

But, when Trevor Daley suffered an injury in Game Five against the Capitals, it was Ruhwedel who got that call from Sullivan.

The Penguins closed out the Caps in seven games, and Ruhwedel was also in the line-up through the first four contests of the Eastern Conference Final versus Ottawa – including 21:25 in Game Three.

As Daley returned from his lower-body injury, Ruhwedel was again relegated to the press box, but was on the ice in Nashville to hoist the Stanley Cup with the rest of his teammates.

Suffice to say, Ruhwedel felt good about electing to sign with Pittsburgh.  It is hard to imagine the season unfolding more perfectly as he described the year as one that “exceeded all expectations.”

Still, after the most successful season of his career, Ruhwedel headed into the off-season once again as a free agent and with a choice to make.  Ruhwedel re-signed with the Penguins on July 22, signing a two-year, one-way deal.  From the sound of it, he spent way less time on the decision this time around.

“It was really easy to decide to re-sign.  They wanted me back and I really wanted to be back,” Ruhwedel stated. “It’s just a good mutual relationship and I think it’s a good fit for both of us.”