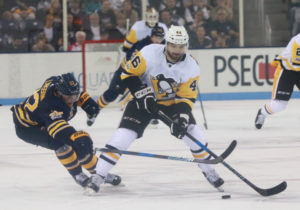 UNIVERSITY PARK, Pa. – In the building they dub “Hockey Valley”, fans came out en masse to see NHL preseason action between the Pittsburgh Penguins and Buffalo Sabres.  A sold-out crowd at Pegula Ice Arena watched as Jack Eichel scored 25 seconds into overtime to give Buffalo a 4-3 victory over the Penguins.

In a back-and-forth affair that had the Penguins holding on to a 3-2 lead late in regulation, Matt Tennyson helped Buffalo force overtime when his shot from the left circle deflected off of bodies in front and eluded goalie Casey DeSmith with 2:45 remaining.  That set up the dramatic finish in opening moments of the extra period.

Gaining possession deep in the Sabres zone, Jack Eichel skated up-ice on an odd-man rush and ended the match himself, whistling a wrist shot over the blocker of DeSmith.

The Sabres skated a line-up that boasted big names like Eichel and Evander Kane, while Pittsburgh featured many of the organization’s young prospects.  Penguins Head Coach Mike Sullivan felt the team’s first game of the preseason was a worthwhile one for much of the team.

“I think it’s a great opportunity for some of our young players to gain an experience of what the NHL is all about,” he said. “I thought there were a lot of positives things we can draw from it.  We were really excited about the effort tonight.”

Down by a score of 2-1 entering the third period, the Penguins pulled even at 2:34 off a face-off win in the Sabres zone.  Chad Ruhwedel’s blast from the right point was redirected by Jay McClement before skipping past the leg pad of Adam Wilcox.

Pittsburgh headed to the power play later in the third to take its first lead of the contest.  Teddy Blueger led a 3-on-1 rush before flipping a deft pass across the goalmouth to Olli Maatta, who banged home the shot at 11:48 to push the Penguins ahead, 3-2.

Buffalo controlled much of the first period, outshooting Pittsburgh at one point by a 14-5 margin.  Penguins goalie Antti Niemi displayed some acrobatics early to keep it a scoreless tie, but was unable to stop the Sabres during a delayed penalty.  Skating with the extra attacker, Eichel zipped a pass through the slot to an open Jason Pominville on the left post for the tap-in and a 1-0 lead at 12:41.

Pittsburgh came with more some energy to begin the second and knotted the score just 49 seconds into the frame.  After a carry-over power play for the Penguins expired, the Buffalo defense failed to pick up Zach Aston-Reese coming off the bench.  The rookie forward swooped toward the hashmarks to collect a bouncing puck and rifle it over the glove of Sabres netminder Chad Johnson.

“The puck hit off a few skates and just fell right on my stick,” said Aston-Reese. “I didn’t really hesitate. Just put it on net and it went in.  It definitely feels nice to get that goal.”

Pominville helped Buffalo retake the lead with 9:22 left in the period on his second tally of the evening.  Stationed on the right side of the crease, the Sabres winger’s third bid on a rebound opportunity slipped across the goal line.

Niemi, who got the start for Pittsburgh, stopped 21-of-23 shots over two periods.  DeSmith allowed two goals on seven shots in relief.  Ruhwedel had two assists for Pittsburgh.