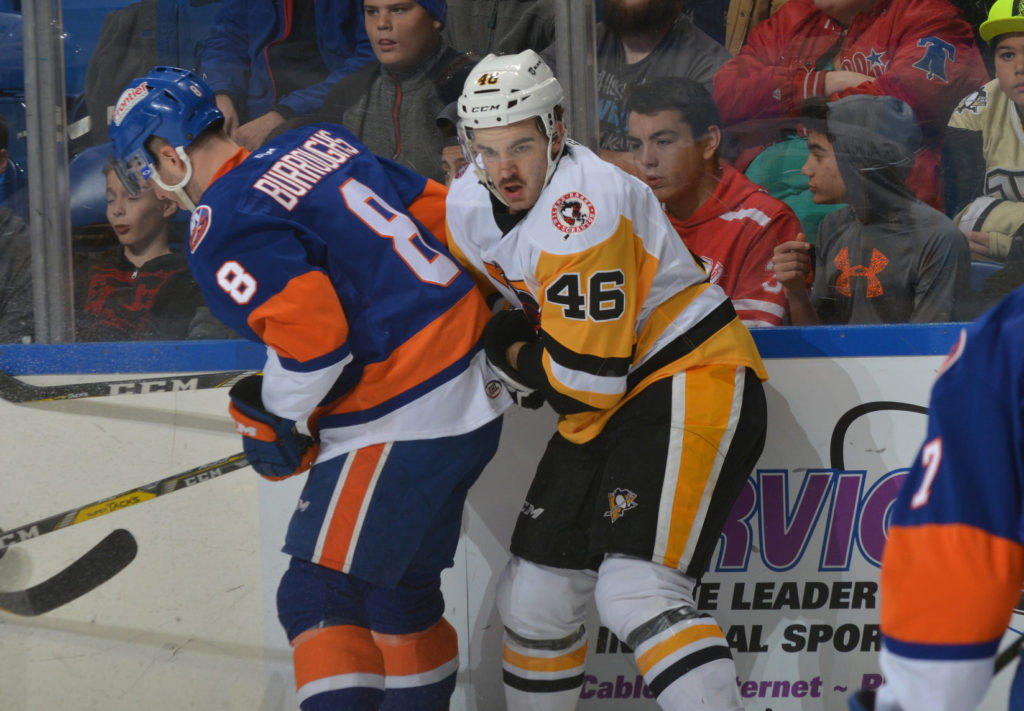 Reid Gardiner was always a standout in the Western Hockey League. Then he became a standout at the Penguins’ rookie tournament in London, Ontario last summer. Shortly thereafter, he became a standout at Wilkes-Barre/Scranton training camp. Gardiner turned a ton a success in a short period of time into an American Hockey League contract with the Penguins last year, and was expected to be a rookie standout for the eventual Kirkpatrick Trophy winners.

When the season started though, Gardiner found that he wasn’t the same beast he was in the WHL. He didn’t have the same open spaces he found in London. The confidence he gained at training camp slowly waned.

Despite showcasing his jaw-dropping shot and pure scoring ability on occasion with the Penguins in 23 games, he decided it would suit him better to utilize his final year of eligibility and return to juniors. The Penguins obliged and returned him to the WHL where he had a unique career opportunity. Gardiner suited up alongside his younger brother, Erik.

“It was special for me and my family,” Reid said. “It was lots of fun, [Erik] being a young guy on the team and me wanting to teach him a few things especially after my pro experience in Wilkes-Barre. I thought we had moments where we maybe didn’t like each other so much, but most of the time we got a long. That’s brother stuff, I guess. I loved every second of it.”

After taking a few games to re-acclimate to a more wide-open style of hockey played at the junior level, Gardiner found his scoring touch again with the Kelowna Rockets. He posted 37 points (18G-19A) in 28 games before unloading a whopping 15 playoff goals and 28 playoff points in only 17 contests during the WHL postseason.

Once the offseason rolled around, Gardiner made the decision to turn pro once again. While there were presumably many suitors for his services after the offensive flair he showed in Kelowna, one team made the most sense: the Wilkes-Barre/Scranton Penguins.

The Penguins’ upcoming training camp will serve as the first chapter in Gardiner’s second term with Wilkes-Barre/Scranton, and he’s determined to show them that he’s better than he was when they allowed him to return to juniors and play alongside his younger brother.

“I want to show management and coaches and the like that I’ve made huge strides over the summer,” Gardiner said. “I am a better player. Over first few weeks of the season, maybe my role gets more defined, but right now I’m just trying to put my best foot forward.”

What’s the biggest difference between last year and the Gardiner 2.0 model he’s been advertising? He says he more mature and knows what to expect from the pro style now, and he catered his training around those traits.

“I think I can maybe hang onto the puck for a half a second longer and keep my head up to make a play,” he said. “I know the pro game now. There won’t be as much as a learning curve. I like to think my skating has improved, too. So people can expect to see a faster player, and hopefully more points come from that.”

The Penguins coaching staff is expecting more points to come from Gardiner, too. At the 2017 Prospects Challenge in Buffalo, New York earlier this month, Wilkes-Barre/Scranton head coach Clark Donatelli discussed Gardiner’s return to the black and gold and what he thinks the stocky sniper can accomplish.

“We want him shooting the puck,” Donatelli said. “[Gardiner] is a player with a really nice shot, he’s a goal scorer. Hopefully, he learned from his pro experience with is last year and can use that to attack the play more. If he’s shooting, he’s always going to be dangerous.”

The danger of Gardiner 2.0 will be unleashed starting this weekend at Wilkes-Barre/Scranton Penguins training camp.