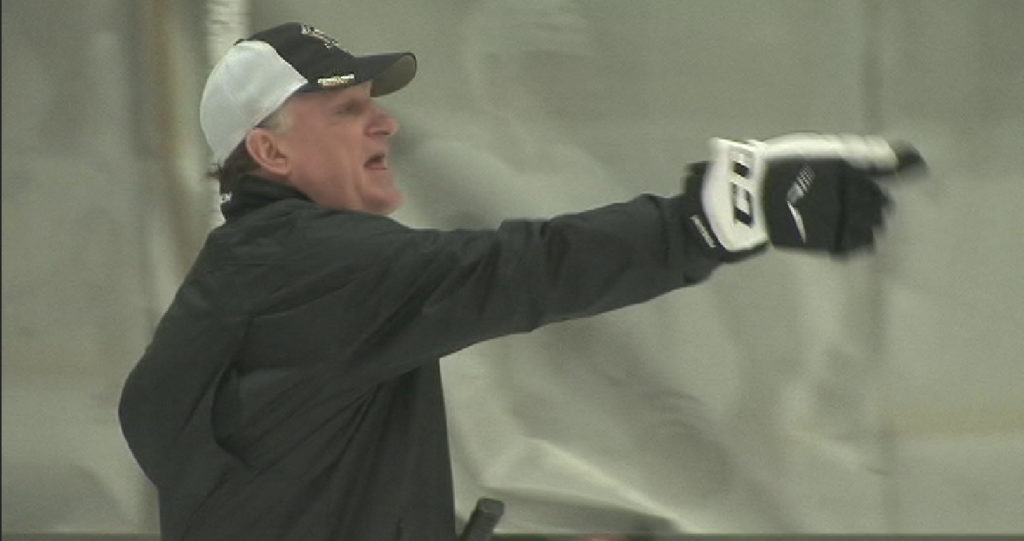 The Wilkes-Barre/Scranton Penguins hit the Toyota Sportsplex ice for the start of training camp on Sunday morning, and stayed until the afternoon.

Coach Clark Donatelli and his staff ran the 28 players on the team’s initial roster through a more than two hour practice, that finally came to a conclusion just after 12:30pm.

For Donatelli, it was a chance to get an extended look at several fresh faces.

“A lot of the guys are new.  The guys are coming out here, trying to make an impression,” he said.  “Every practice we rank all of the players and then we go over it as a staff…I thought some guys here made some good first impressions.”

About half of the players in camp are free agents or inked to ECHL contracts.  And, with a considerable number of players still in camp with the Pittsburgh Penguins, these early practices, as well as this week’s exhibition games, present opportunities for unknown youngsters to leave their marks.

“We’ve got two games here (Wednesday versus Hershey; Friday versus Binghamton) that we’re going to play, and we’re going to a lot of looks at some of the guys we don’t know,” Donatelli said.  “Then we’re going to settle in and see what happens with Pitt with guys coming down for games three and four (Saturday at Hershey; Sunday at Binghamton).”

While it’s likely many of the players currently in Wilkes-Barre won’t be here to start the season, performances in these preseason contests could help in decision on call ups later in the year.

“If some of the guys have to go down to Wheeling, obviously then we’re going to have a good read on what they are,” Donatelli stated.

While Sunday morning saw hockey return to NEPA for the first time since late April, Donatelli hasn’t been away from the sport very much over the past few months.

After Wilkes-Barre/Scranton’s season came to an unexpected early end, Donatelli and assistants J.D. Forrest and Chris Taylor (now with the Rochester Americans), worked with Pittsburgh’s practice squad as they advanced to their second straight Stanley Cup championship through late June.

Donatelli and Forrest then stepped behind the bench to lead the American entry at the Ivan Hlinka Memorial Tournament in early August; traveled to Buffalo for the 2017 Prospects Challenge a month later; and spent a week with the NHL club as the Pens opened training camp.

“We had a short break, but it was great,” he said.  “Anytime you’re winning Stanley Cups, you’re playing a long time.  So that experience was great and our guys loved it.

“Short summer, but I’m excited to be back.”