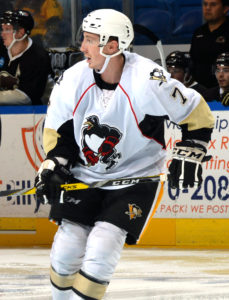 WILKES-BARRE, Pa. – The Wilkes-Barre/Scranton Penguins have trimmed their training camp roster with four players being released from their tryout agreements with the team.

Forwards Daniel Leavens, Tom Mele and Kenny Ryan as well as defenseman Danny Fick will all report to the Penguins’ ECHL affiliate, the Wheeling Nailers.

The Penguins have 45 players remaining in camp following today’s transactions.

The Penguins’ next preseason game is on Friday, Sept. 29 when they take on the Binghamton Devils. Puck drop is scheduled for 7:05 p.m. at Mohegan Sun Arena at Casey Plaza.