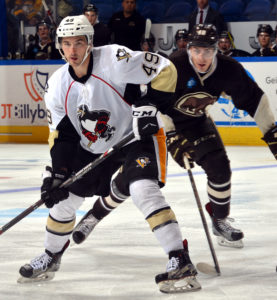 WILKES-BARRE, Pa. – The Wilkes-Barre/Scranton Penguins have reduced their training camp roster with five players being released from their tryout agreements with the team.

Forward Hunter Fejes as well as defensemen Dan Milan and Kevin Schulze will all report to the Penguins’ ECHL affiliate, the Wheeling Nailers. Defenseman Matt Petgrave will report to the Brampton Beast (ECHL). Forward Justin Parizek is effectively a free agent.

The Penguins have 44 players remaining in camp following today’s transactions. Wilkes-Barre/Scranton’s roster can be viewed by clicking here.

The Penguins’ next preseason game is tonight, Saturday, Sept. 30, when they travel to Chocolatetown to take on the Hershey Bears. Puck drop is scheduled for 7:00 p.m. at Giant Center.

Wilkes-Barre/Scranton opens up the regular season on Saturday, Oct. 7 at Mohegan Sun Arena against the  Charlotte Checkers. Individual tickets for all Penguins home games are available at the Mohegan Sun Arena at Casey Plaza box office, online at TicketMaster.com, or by calling 800-745-3000.