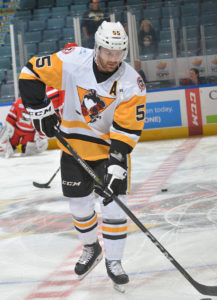 The Pittsburgh Penguins have recalled defenseman Chris Summers from Wilkes-Barre/Scranton of the American Hockey League, it was announced today by executive vice president and general manager Jim Rutherford.

Summers, 29, who has played seven-plus seasons of pro hockey, signed a two-year, two-way contract with the Pens over summer after notching 12 points (4G-8A) in 74 games with the Hartford Wolf Pack of the AHL in 2016-17.

The 6-foot-2, 207-pound Ann Arbor, Michigan native served as an alternate captain for the Wolf Pack last year, and was chosen to wear the ‘A’ in his first season with Wilkes-Barre/Scranton this year. Summers made his WBS debut in Saturday’s season-opener, finishing even with two shots on goal.

Summers has competed in 70 NHL contests in his career with the Arizona Coyotes and New York Rangers, tallying nine points (2G-7A). In his 387 career AHL games, he has accrued 336 penalty minutes with 59 points (13G-46A).

Summers played four years of collegiate hockey at Michigan, where he was team captain as a senior, and an alternate captain his junior year. During his collegiate career, Summers suited up for Team USA at the 2008 World Junior Championship, where he was an alternate captain and was chosen as one of the team’s “Top Three Players” of the tournament.

Summers was originally chosen by the Arizona Coyotes in the first round (29th overall) in the 2006 NHL Draft.

Sunday’s contest is the Penguins’ first KIDS FREE SUNDAY of the season, with fans ages 14 and younger able to get in for FREE with a paid adult admission.

Tickets for all Penguins home games are available at the Mohegan Sun Arena box office, online at TicketMaster.com or by calling 570-208-7367.