WILKES-BARRE, Pa. – The Wilkes-Barre/Scranton Penguins seized their second win of the 2017-18 season with a 6-1 victory against the Syracuse Crunch on Sunday afternoon at Mohegan Sun Arena at Casey Plaza.

Wilkes-Barre/Scranton (2-2-0-0) saw two rookies take the reins of its potent offense, Daniel Sprong and Gage Quinney, who had a goal and two assists each. Sprong extended his goal-scoring streak to four games, while Quinney impressed with his three-point output in what was his AHL debut.

The Penguins got on the board just 34 seconds into the game with a rebound goal on the first shot of the night by Jean-Sébastien Dea. 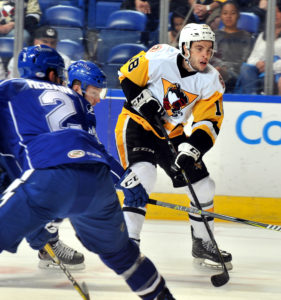 Syracuse goaltender Connor Ingram held Wilkes-Barre/Scranton in check for the rest of the opening frame, denying the Penguins on 11 of the 12 shots he faced in the first period. However, the floodgates opened on Ingram and the Crunch quickly in the second stanza.

Garret Wilson had a puck ricochet off of his boot and across the goal line 1:16 into the second period. Exactly three minutes later, Thomas Di Pauli tipped in a feed from Teddy Blueger and put the Penguins in a commanding 3-0 lead.

The Crunch answered during a five-on-three power play, when Cory Conacher’s shot deflected off of Wilson’s stick and snuck over the glove of Casey DeSmith.

After extended power play time on the other side of the ice, Christian Thomas scored his first goal as a Penguin and reestablished his team’s three-goal lead with 3:01 left in the second period.

Sprong made fans wait until the final period of regulation to extend his goal-scoring streak to four games, but he did just that midway through the third frame, making it 5-1. Sprong later set up Quinney for the 22-year-old’s first AHL goal with 5:18 left in the game.

DeSmith earned his second win on the season by saving 24 out of the 25 shots he faced, and he still has yet to be scored on at even strength so far this season. Ingram recorded 25 saves for the Crunch.

Wilkes-Barre/Scranton’s next game is Friday, Oct. 20 against the Laval Rocket at Mohegan Sun Arena at Casey Plaza. Puck drop between the Penguins and Rocket is scheduled for 7:05 p.m. Individual tickets for all Penguins home games are available at the Mohegan Sun Arena at Casey Plaza box office, online at TicketMaster.com, or by calling 800-745-3000.

PENGUINS STREAK AT SIX AFTER 4-2 WIN AT SPRINGFIELD