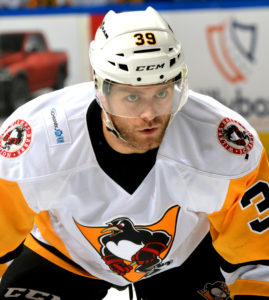 WILKES-BARRE, Pa. – The Wilkes-Barre/Scranton Penguins came away with a 4-3 overtime victory against the Providence Bruins Saturday night at Mohegan Sun Arena at Casey Plaza thanks to another stellar performance by Ryan Haggerty.

Haggerty notched three points during the contest, including the overtime game-winner that earned Wilkes-Barre/Scranton (9-2-0-1) a point in the standings for the ninth-straight game.

The two division rivals showed their intensity from the get-go as Tom Sestito and Chris Breen decided to drop the gloves 33 seconds into the contest. One minute later, Ryan Fitzgerald gave Providence an early 1-0 lead on a breakaway.

The Bruins went up 2-0 at 8:01 of the middle frame. Colby Cave received a centering pass and elevated the puck over a screened Casey DeSmith. Wilkes-Barre/Scranton started to turn the tide a little more than two minutes after Cave’s tally, as Kevin Czuczman’s first goal as a Penguin cut the deficit in half.

Wilkes-Barre/Scranton pulled even at 6:58 of the third period when another defenseman, Jarred Tinordi, also scored his first goal in a Penguins uniform. Tinordi launched the puck at the net with a slap shot following a feed from Haggerty, who notched his second assist of the game at that point.

Thomas Di Pauli put the Penguins up, 3-2, deflecting a shot from Andrey Pedan through the legs of Bruins goalie Zane McIntrye with just 2:23 remaining in the final frame.

With McIntyre pulled in favor of an extra attacker, the Bruins tied the game with 28.3 seconds left. Fitzgerald was credited with his second goal of the night and sent the game to sudden death overtime.

Haggerty scored the game-winner just 20 seconds into the extra period after being set up beautifully on a two-on-one pass from Jean-Sébastien Dea. The deciding tally was Haggerty’s sixth goal of the season in five games played.

DeSmith turned aside 32 of the 35 shots he faced for the Penguins. McIntrye stopped 25 of 28 in net for the Bruins. The Penguins’ penalty kill was also perfect on the night, going six-for-six against the Bruins’ man advantage unit.

Wilkes-Barre/Scranton’s next game is tomorrow, Sunday, Nov. 12, when it takes on the Hershey Bears at Giant Center. The Penguins’ next home game is Wednesday, Nov. 22 against the Lehigh Valley Phantoms. Puck drop between the Penguins and Phantoms is scheduled for 7:05 p.m. Individual tickets for all Penguins home games are available at the Mohegan Sun Arena at Casey Plaza box office, online at TicketMaster.com, or by calling 800-745-3000.