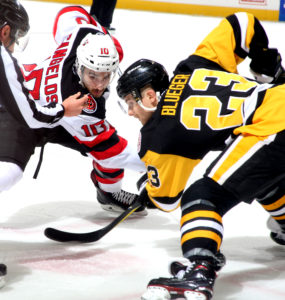 BINGHAMTON, N.Y. – The Wilkes-Barre/Scranton Penguins extended their point streak to 11 games with a 4-3 victory over the Binghamton Devils on Friday night at Floyd L. Maines Veterans Memorial Arena.

Wilkes-Barre/Scranton (11-2-0-1) allowed three power play goals to Binghamton, but hung onto the victory thanks in large part to a 31-save performance by goalie Casey DeSmith.

The Penguins wasted little time finding the back of the net, as Ryan Haggerty tallied his seventh goal of the season just 12 seconds into the game.

Wilkes-Barre/Scranton continued to doggedly pursue the Binghamton defense and force a bevy of turnovers throughout the opening frame, but a mid-period power play afforded the Devils the chance to pull even. Brandon Gignac took full advantage of that opportunity, scooping up his own rebound and lifting it underneath the crossbar.

Thomas Di Pauli put the Penguins back on top, 2-1, scoring with 17.2 seconds remaining in the first period.

Binghamton tied the game once again with a man advantage marker at 17:43 of the middle stanza. A shot fired by Joseph Blandisi redirected off of Bracken Kearns at the front of the net and trickled across the goal line.

Wilkes-Barre/Scranton popped on top once again with a one-timer snipe by Adam Johnson at 9:55 of the third period. Christian Thomas scored on a breakaway a little over two minutes later, granting the Penguins a 4-2 lead.

Jacob MacDonald rallied the Devils to another power play goal, cutting the deficit down to one. However, DeSmith slammed the door shut on Binghamton’s comeback bid and improved his personal record to 8-0-1 on the season.

Ken Appleby recorded 14 saves while manning the crease for the Devils.

PENS DIG OUT OF THREE-GOAL DEFICIT, WIN 5-4 IN SHOOTOUT