WILKES-BARRE, Pa. – The Wilkes-Barre/Scranton Penguins’ line of Ryan Haggerty, Jean-Sébastien Dea and Zach Aston-Reese put forth a dominant performance to take down the Lehigh Valley Phantoms, 4-2, at Mohegan Sun Arena at Casey Plaza on Wednesday night.

Haggerty, Dea and Aston-Reese all racked up three-point nights as Wilkes-Barre/Scranton (12-2-0-1) extended their league-best point streak to 12 games.

The Penguins wasted little time getting on the board when Haggerty scored just 31 seconds into game. This was the second game in a row that Haggerty found the back of the net in the first minute of play.

Corbin Knight evened things up for the Phantoms at 5:29 of the opening frame, taking a pretty cross-crease feed from Alex Krushelnyski and lifting the puck over a diving Casey DeSmith. Less 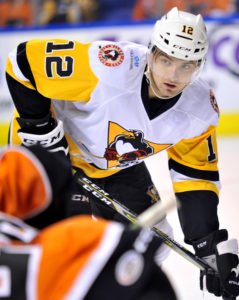 than two minutes later, Lehigh Valley took a 2-1 lead when Greg Carey gathered a rebound and sneak it across the goal line.

Wilkes-Barre/Scranton tied things up again as Haggerty and Dea connected on a two-on-one rush at 6:57 of the middle stanza. Haggerty soared out of the Penguins’ defensive zone with the puck, gained access into the Phantoms’ zone and fed the puck to Dea, who then beat a sprawling Alex Lyon.

The Penguins gained a 3-2 lead at 15:54 of the second period with Colin Smith fired a wrist shot between Lyon’s legs for his second goal of the season.

DeSmith and the Penguins held off the Phantoms throughout the third period, and in the very last moments of the third period, Haggerty battled through the Lehigh Valley defenders guarding an empty net and record his second goal of the night. The empty netter not only sealed the 4-2 victory for Wilkes-Barre/Scranton, but also tied him for the team lead with nine goals this season.

Haggerty completed the contest with two goals and one assist, while Dea had one tally and two helpers, and Aston-Reese notched three assists throughout the game.

DeSmith turned aside 31 of the 33 shots he faced to remain unbeaten in regulation through his first 10 starts this season (9-0-1). Lyon stopped 34 shots in the loss for Lehigh Valley.

The Penguins’ next game takes place on Friday, Nov. 24 when the team travels to upstate New York for the first half of a home-and-home set against the Syracuse Crunch. Wilkes-Barre/Scranton returns to Mohegan Sun Arena at Casey Plaza to face Syracuse on Saturday, Nov. 25 at 7:05 p.m. Individual tickets for all Penguins home games are available at the Mohegan Sun Arena at Casey Plaza box office, online at TicketMaster.com, or by calling 800-745-3000.