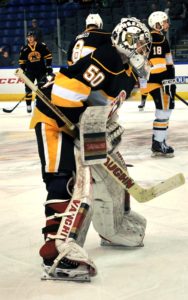 Stevens previously signed a PTO with Wilkes-Barre/Scranton on Oct. 25 of this season, but did not appear in any games with the team. Stevens has played three games this year with the Penguins’ ECHL affiliate, the Wheeling Nailers, posting a 2-0-1 record. Stevens owns a .907 save percentage and a 3.27 goals against average in his time with the Nailers, as well.

The 24-year-old from Niskayuna, New York split last season between the Manchester Monarchs (ECHL) and   Tulsa Oilers (ECHL). Prior to turning pro in 2015, Stevens spent four years playing at Union College. He was named 2014 ECAC Goaltender of the Year and ECAC First Team All-Star after a season in which he recorded the conference’s best save percentage (.929) and captured the NCAA National Championship..

Wilkes-Barre/Scranton’s next game is Friday, Dec. 1, when the Penguins welcome the Milwaukee Admirals to Mohegan Sun Arena at Casey Plaza. Puck drop between the Penguins and Admirals is 7:05 p.m., and marks the return of WBRE/WYOU Eyewitness News Fan Fridays. Lower bowl tickets (excluding glass seats) for Friday’s game against Milwaukee are $14, and select draught beers are $2 from 6:00-7:30 p.m. Individual tickets for all Penguins home games are available at the Mohegan Sun Arena at Casey Plaza at Casey Plaza box office, online at TicketMaster.com, or by calling 800-745-3000.