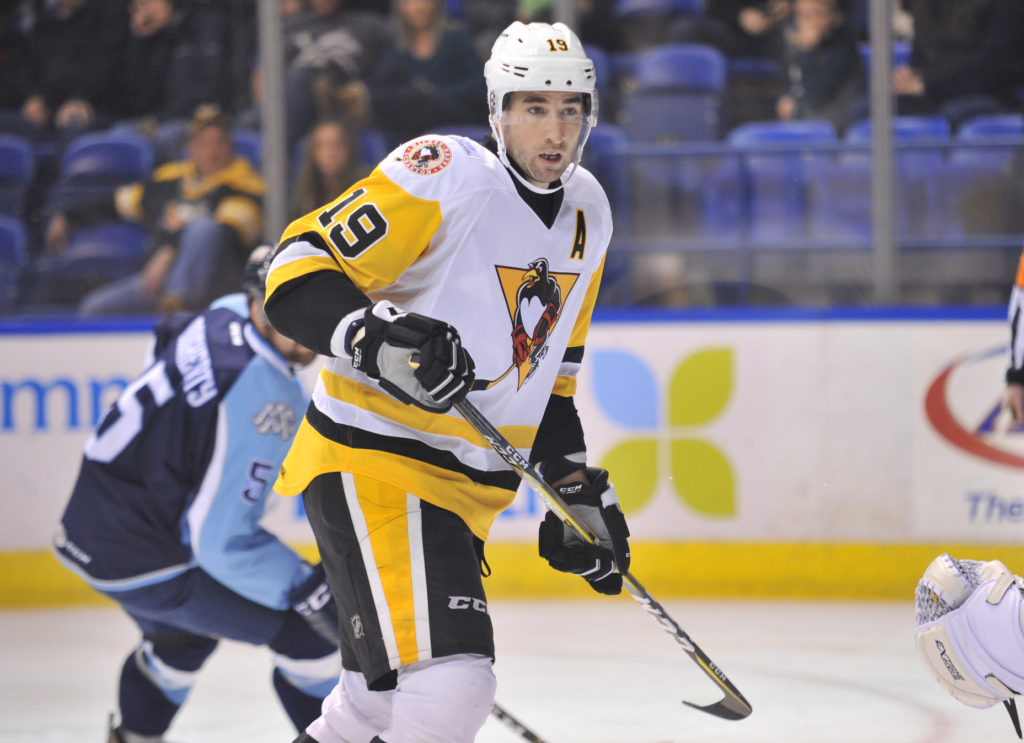 WILKES-BARRE, Pa. – Garrett Wilson returned to the Wilkes-Barre/Scranton Penguins’ line-up on Friday, putting forth an inspired performance in his team’s 5-4 overtime victory over the Milwaukee Admirals at Mohegan Sun Arena at Casey Plaza.

Wilson recorded his first career AHL hat trick in Saturday’s game, with all three goals coming in the first period while playing with a heavy heart.

“It was a tough couple of weeks there with my mother passing away,” Wilson said. “Those goals are for her, and I feel like she was definitely helping me out there tonight.”

Wilkes-Barre/Scranton (13-4-0-1) saw Wilson start the scoring only 2:26 into the contest on his first shift of game, batting in a two-on-one pass from Josh Archibald.

The Admirals tied the score, 1-1, with a shorthanded goal by Harry Zolnierczyk less than two minutes after Wilson kicked things off. Wilson answered back at 9:38 of the first period, then completed the hat trick on a power play goal three and a half minutes later. His third goal of the period also served as the 100th goal of Wilson’s professional career.

Eighty seconds into the second period, Admirals points leader Emil Pettersson wired a wrist shot that got past the glove side of Colin Stevens, cutting the Penguins’ lead down to 3-2.

Archibald, who was assigned to Wilkes-Barre/Scranton on condition loan Saturday morning, got in on the scoring act with a shorthanded goal. Archibald’s first tally of the season came with 55 seconds remaining in the middle frame.

Milwaukee pulled within one again thanks to its man advantage unit clicking on its fifth power play of the night. Mark Zengerle was responsible for the Admirals’ power play goal with 12:28 left in regulation, and Anthony Richard tied it up, 4-4, when only 3:44 was left on the clock.

Jean-Sébastien Dea sent the crowd home happy when he went top shelf for the overtime game-winning goal at 2:51 of the extra period.

Stevens stopped 29 out of the 33 shots he faced, earning his first career AHL win in his first AHL start. Meanwhile, his counterpart, Juuse Saros, made 26 saves for the Admirals.

The Penguins’ next game is tomorrow, Saturday, Dec. 2, when they take on the Rochester Americans  at Mohegan Sun Arena at Casey Plaza. Saturday night’s contest against Rochester also serves as Wilkes-Barre/Scranton’s annual Teddy Bear Toss game. Puck drop between the Penguins and Americans is 7:05 p.m. Individual tickets for all Penguins home games are available at the Mohegan Sun Arena at Casey Plaza box office, online at TicketMaster.com, or by calling 800-745-3000.