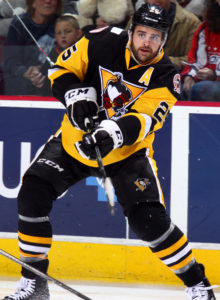 HERSHEY, Pa. – The Wilkes-Barre/Scranton Penguins fell in overtime to the Hershey Bears, 4-3, on Sunday at Giant Center.

Daniel Sprong and Gage Quinney led the way offensively for Wilkes-Barre/Scranton (13-5-1-1) with two-point efforts, but Chris Bourque got the last laugh for Hershey by scoring the overtime game-winner.

The Penguins took off early when Quinney fished a puck from a net-front scramble and poked it into the Bears’ net 2:12 into the game. Quinney later set up Daniel Sprong midway through the first period

for his 10th tally of the season, giving Wilkes-Barre/Scranton a 2-0 lead.

Liam O’Brien cut the Bears’ deficit in half with 6:33 left in the second period, opening up the skies at Giant Center for thousands of teddy bears and stuffed animals to rain down onto the ice as part of Hershey’s teddy bear toss game.

O’Brien struck again at 8:49 of the third, pulling Hershey into a 2-2 tie with Wilkes-Barre/Scranton. With a delayed penalty upcoming to the Penguins, the Bears pulled their goalie for an extra attacker. Following a pitch and catch give-and-go rush through the neutral zone, O’Brien fired his second goal of the night past Anthony Peters.

Hershey assumed a brief 3-2 lead when a point shot by Jonas Siegenthaler slipped in with 6:10 left in regulation, but Tom Sestito brought the game back to an even score less than a minute later.

Sestito’s goal earned the Penguins a point in the standings by forcing overtime, but Bourque found the game-winner on a power play 1:15 into the extra period.

Anthony Peters started in net for Wilkes-Barre/Scranton for the second night in a row, making 25 saves in the OT loss. Pheonix Copley turned aside 22 Penguins shots to earn the win for the Bears.

The Penguins’ next game is Wednesday, Dec. 6, when they travel to PPL Center to take on the Lehigh Valley Phantoms. Wilkes-Barre/Scranton’s next home game is Friday, Dec. 8 against the Charlotte Checkers. The Checkers’ visit to Mohegan Sun Arena at Casey Plaza is also a WBRE/WYOU Eyewitness News Fan Friday. All tickets for Dec. 8’s contest are $14, and select draught beers are $2 from 6:00-7:30 p.m. Puck drop between the Penguins and Checkers is 7:05 p.m. Individual tickets for all Penguins home games are available at the Mohegan Sun Arena at Casey Plaza box office, online at TicketMaster.com, or by calling 800-745-3000.

PENGUINS DOWN DEVILS IN OVERTIME, 4-3