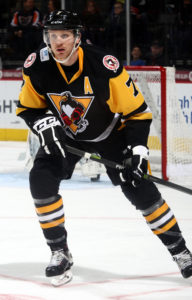 ALLENTOWN, Pa. – The Lehigh Valley Phantoms used a three-goal outburst during a five-minute span in the first period to set up a 5-0 victory over Wilkes-Barre/Scranton Penguins at PPL Center on Wednesday night.

Wilkes-Barre/Scranton (13-6-1-1) threw 39 shots at Lehigh Valley goalie Dustin Tokarski, who turned all of them all aside for his first shutout of the season.

The Phantoms struck twice in a 53-second stretch to take a sudden 2-0 lead. First, Mikhail Vorobyev thrust a centering feed into the back of the Penguins’ net, then Corban Knight pounced on a turnover and buried it at 13:10 of the opening frame.

Knight contributed to Lehigh Valley’s next goal as well, setting up Oskar Lindblom on a two-on-one rush with under three minutes left in the first period.

Wilkes-Barre/Scranton had a power play early in the second period and hoped to cut into the deficit, but instead saw Tyrell Goulbourne rush down the ice shorthanded and make it 4-0. Penguins netminder Anthony Peters left the game following the Goulbourne goal having made 15 stops on 19 shots faced, and he was replaced by Sean Maguire.

Matt Read put a bow on the Phantoms’ victory by scoring his team’s fifth goal of the night at 13:36 of the third period. Read’s bid was the only shot of 16 that solved Maguire once he stepped in for Peters.

Wilkes-Barre/Scranton’s penalty kill finished the night a perfect five-for-five, while its man advantage unit was unable to convert on five opportunities of its own.

The Penguins’ next game is Friday, Dec. 8, against the Charlotte Checkers. Puck drop between the Penguins and Checkers is 7:05 p.m. and is a WBRE/WYOU Eyewitness News Fan Friday. All tickets for Friday’s contest are $14, and select draught beers are $2 from 6:00-7:30 p.m. Individual tickets for all Penguins home games are available at the Mohegan Sun Arena at Casey Plaza box office, online at TicketMaster.com, or by calling 800-745-3000.