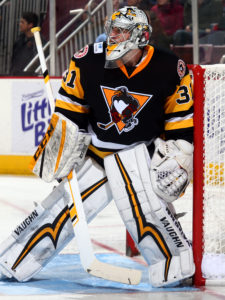 HERSHEY, Pa. – The Wilkes-Barre/Scranton Penguins made a triumphant return to the win column on Sunday evening by beating the Hershey Bears, 4-1, at Giant Center.

Wilkes-Barre/Scranton (14-7-1-1) came out firing on all cylinders from the drop of the first puck and never looked back as they defeated their I-81 rival for the third time this season.

The Penguins erupted for three goals in the first period by taking advantage of the Bears’ errors and burying them into the back of the net. First, Christian Thomas collected a turnover in the slot and turned it into a slap shot goal at 7:15 of the first period. Daniel Sprong annihilated a one-timer to the top corner during a two man advantage at 10:10 of the opening frame, and then Thomas Di Pauli grabbed another Hershey turnover less than two minutes later and put it behind Pheonix Copley for a 3-0 Penguins lead.

Hershey got on the board before first intermission though with Tyler Graovac completing a tic-tac-toe passing sequence by the Bears when only 17.4 seconds remained in the opening frame.

Both teams were held off the scoresheet in the second period, mostly due to the strong play of Penguins goaltender Sean Maguire. Maguire turned aside 10 shots in the middle frame, and ultimately recorded 18 saves when the game was over for his first win of the season.

Wilkes-Barre/Scranton scored another two-man advantage marker at 9:48 of the third period, extending its lead to 4-1. Defenseman Zach Trotman unleashed a potent slap shot from the top of the slot, scoring his first AHL goal since Feb. 14, 2015.

The Penguins’ power play finished the night going two-for-eight, while their penalty kill staved off three of the Bears’ four man advantages.