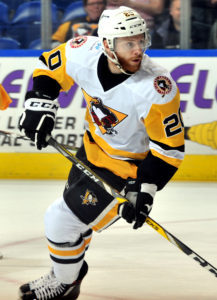 Burton has played in nine games this season for Wilkes-Barre/Scranton, recording one goal and one assist in that time. The 26-year-old from Echo Bay, Ontario posted two goals and one assist for three points in five games with the Nailers this season. He has 80 points (33G-47A) in 118 career ECHL games, all spent with Wheeling.

Taylor signed an amateur tryout agreement with Wilkes-Barre/Scranton late last season and skated in six games for the Penguins in 2016-17. After sustaining a pre-season injury, the Clifton Park, New York defenseman rehabbed with Wilkes-Barre/Scranton before being reassigned to Wheeling on Nov. 8, 2017. He put up six points (2G-4A) in 14 games with the Nailers, including his first professional goal on Nov. 17 at Norfolk.

Taylor was selected by Pittsburgh in the seventh round (203rd overall) of the 2014 NHL Entry Draft.