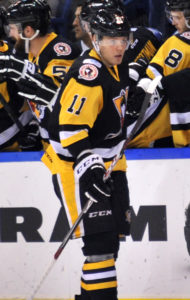 Sprong and DeSmith will represent Wilkes-Barre/Scranton during the two-day All-Star festivities on Sunday, Jan. 28 and Monday, Jan. 29 in Utica, New York. Full rosters for the All-Star Classic were determined by committees of AHL coaches, and all 30 AHL teams are represented by at least one All-Star. Click here to view the league’s full release and rosters.

Sprong currently leads the Penguins with 18 goals and 29 points. His 18 goals also tops all AHL rookies. Seven of his goals this season have come on the power play, which also leads Wilkes-Barre/Scranton and ranks second among league rookies. The native of Amsterdam, Netherlands was recently named CCM/AHL Rookie of the Month for December. During that time, Sprong racked up nine goals – including three game-winners – and five assists for 14 points in 12 games for Wilkes-Barre/Scranton before earning a recall to the Pittsburgh Penguins (NHL).

Sprong, 20, is one of six rookie players selected to AHL All-Star rosters.

Casey DeSmith has stood out in his third season as a pro, continuing to build on what was an All-Rookie Team caliber performance last year with Wilkes-Barre/Scranton. DeSmith got off to a torrid start to the 2017-18 season by posting a 9-0-1 record through his first 10 games, not suffering a regulation loss until after Thanksgiving (Nov. 24, 2017). The 26-year-old from Rochester, New Hampshire leads all Atlantic Division goaltender this season with a .911 save percentage and ranks second among division netminders in goals against average (2.72). 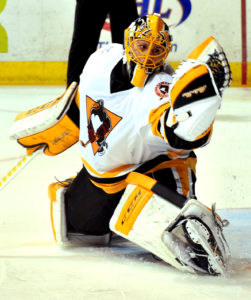 DeSmith’s selection to the 2018 AHL All-Star Classic presented by Turning Stone Resort Casino means that the Penguins have had a goalie named to the AHL’s All-Star event for the fourth year in a row. Furthermore, it has been four different goalies announced to the All-Star Classic from Wilkes-Barre/Scranton in that time (Jeff Zatkoff, 2015;  Matt Murray, 2016;  Tristan Jarry, 2017.)

The Penguins’ next game is tomorrow, Friday, Jan. 5, against the Springfield Thunderbirds. Puck drop between the Penguins and Thunderbirds is scheduled for 7:05 p.m. at Mohegan Sun Arena at Casey Plaza. Individual tickets for all Penguins home games are available at the Mohegan Sun Arena at Casey Plaza box office, online at TicketMaster.com, or by calling 800-745-3000.