Wilkes-Barre/Scranton (21-10-2-1) to visit Belleville, Laval for the first and only time this season 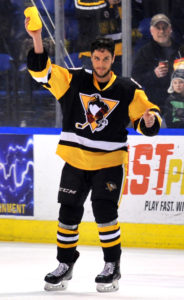 Wednesday, Jan. 3 – PENGUINS 3 vs. Bridgeport 2 (OT)
Wilkes-Barre/Scranton stormed back from a two-goal deficit in the third period to tie the game with 23.5 seconds left in regulation and then win just 26 seconds into overtime. Ryan Haggerty and Greg McKegg tallied to even the score, and then Teddy Blueger’s third overtime game-winning goal this season sent the crowd home happy.

Friday, Jan. 5 – PENGUINS 4 vs. Springfield 2
A three-goal third period assisted the Penguins in beating the Thunderbirds for the second time this season. McKegg and Haggerty scored for the second game in a row. Haggerty’s 13th goal of the year turned out to be his third game-winner this season.

Saturday, Jan. 6 – PENGUINS 6 vs. Belleville 0
The Penguins wrapped up their homestand with authority, shutting out the Senators in Belleville’s first ever visit to Mohegan Sun Arena at Casey Plaza. Christian Thomas led the way for Wilkes-Barre/Scranton with two goals and an assist, while Casey DeSmith recorded his second clean sheet of the season.

Friday, Jan. 12 – PENGUINS at Belleville
Wilkes-Barre/Scranton hopes to repeat its last game’s result as they tangle with Belleville again. The Senators, the sixth-place team in the North Division, were outscored 12-1 last weekend.

Saturday, Jan. 13 – PENGUINS at Laval
The Penguins take on the Rocket for the second time this season. Their first meeting was a high flying thriller, with Wilkes-Barre/Scranton emerging victorious in overtime, 6-5. Saturday’s 4:00 p.m. puck drop will be a showdown between the Penguins’ third ranked offense (3.59 goals per game) and the Rocket’s 28th ranked defense (3.47 goals against per game).

– Penguins Daniel Sprong and Casey DeSmith were named to the Atlantic Division All-Star team for the 2018 AHL All-Star Classic in Utica, New York on Thursday, Jan. 4.

– DeSmith’s inclusion on the Atlantic’s All-Star squad marks the fourth year in a row that a Penguins’ goalie has been named to the AHL All-Star Classic (Jeff Zatkoff, 2015; Matt Murray, 2016;  Tristan Jarry, 2017).

– Garrett Wilson is on a four-game point streak and has six points (1G-5A) since the holiday break. Points in four-straight games ties an AHL career high for Wilson.