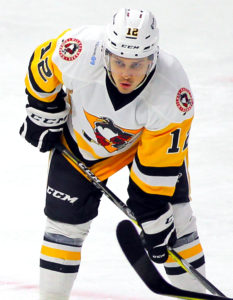 WILKES-BARRE, Pa. – The Wilkes-Barre/Scranton Penguins announced today that they have recalled forward Cody Wydo from their ECHL affiliate, the Wheeling Nailers.

Wydo recently appeared in the 2018 ECHL All-Star Classic on Monday, Jan. 15, representing the Nailers and the North Division. The third-year pro recorded the second best time in the fastest skater event of the ECHL All-Star Skills Competition (13.04 seconds).

Over the course of his 166-game ECHL career, the forward from Allen Park, Michigan has posted 68 goals and 81 assists for 149 total points.

Wydo posted an assist in his first game with Wilkes-Barre/Scranton this season on Dec. 22 vs. Binghamton. It was his only point in six games with the Penguins this season. In nine career AHL games, all with Penguins, Wydo has one goal and one assist for two points.

The Penguins’ next game is tonight, Wednesday, Jan. 17, against the Lehigh Valley Phantoms. Puck drop between the Penguins and Phantoms is scheduled for 7:05 p.m. Individual tickets for all Penguins home games are available at the Mohegan Sun Arena at Casey Plaza box office, online at TicketMaster.com, or by calling  800-745-3000.