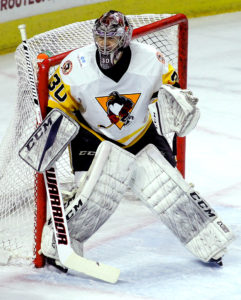 PROVIDENCE, R.I. – Despite a career performance from goalie Anthony Peters, the Wilkes-Barre/Scranton Penguins were dealt a 1-0 loss at the hands of the Providence Bruins on Friday night at Dunkin’ Donuts Center.

Peters recorded 42 saves between the pipes for the Penguins, but Wilkes-Barre/Scranton (24-11-2-1) could not find the back of the net and saw its season-best eight-game winning streak come to an end.

Peters had to be sharp from the get-go as Providence used heavy forecheck and a mid-period power play to test the goaltender from all angles. The Blyth, Ontario native weathered the onslaught and made 13 saves in the opening frame.

The second period began with Wilkes-Barre/Scranton generating two glorious scoring chances while shorthanded. First Jarrett Burton missed wide following a turnover forced by the heavy press of Garrett Wilson, and Teddy Blueger got loose for a breakaway only to be turned aside by Zane McIntyre. Both McIntyre and Peters continued to answer the bell at opposite ends of the ice to keep the contest knotted at zero after two periods.

In the third, Anders Bjork was robbed on two separate occasions by Peters, who made arguably his two best saves of the night on the rookie recently reassigned from the NHL.

Peters stifled the Bruins’ scoring chances until Providence finally solved him during its fifth power play of the game. Tommy Cross gave the Bruins the first and only tally of the night by beating Peters through a group of players gathered in front of the net at 11:13 of the third period.

The Penguins pulled Peters late in favor of the extra attacker, but even the six-on-five advantage couldn’t help Wilkes-Barre/Scranton get a tying goal past McIntyre who posted 28 saves for the shutout.

The Penguins’ next game is Sunday, Jan. 21, when they take on the Hartford Wolf Pack at XL Center.  Wilkes-Barre/Scranton’s next home game is Saturday, Jan. 27 against the Binghamton Devils. Puck drop between the Penguins and Devils is scheduled for 7:05 p.m. at Mohegan Sun Arena at Casey Plaza. Individual tickets for all Penguins home games are available at the Mohegan Sun Arena at Casey Plaza box office, online at TicketMaster.com, or by calling 800-745-3000.