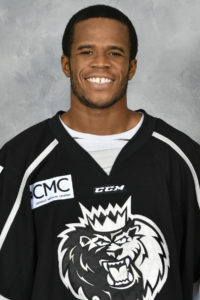 Williams joins the Penguins from the Manchester Monarchs (ECHL), with which he has a 13-6-3 record, .918 save percentage and 2.54 goals against average in his rookie season. Williams, 25, hails from Canton, Michigan, and is coming off of one the best seasons by a college netminder in recent years. After transferring to Canisius College for his senior season, Williams posted the best save percentage in the country (.943) and tied for the national lead in shutouts (6). He was named the Atlantic Hockey Association’s Goaltender of the Year, Player of the Year and First Team All-Star.

Taylor skated in three games with Wilkes-Barre/Scranton this season after joining the team on an amateur tryout agreement late in the 2016-17 campaign. In nine AHL games, the 23-year-old defenseman has posted one assist. Taylor put up six points (2G-4A) in 14 games with the Nailers this season, including his first professional goal on Nov. 17 at Norfolk.

Tiffels, 22, has appeared in 11 games for the Penguins this season, recording one goal and one assist in that time. He notched his first AHL goal on Nov. 25, 2017 against the Syracuse Crunch. The Cologne, Germany native and first-year pro posted four goals and eight assists for 12 points over the course of the first 15 ECHL games of his career.

Morrison will report back to the Penguins’ ECHL affiliate, the Wheeling Nailers.

The Penguins’ next game is tonight, Friday, Jan. 19, as they travel to Providence for the first time this season for a date with the Bruins. Wilkes-Barre/Scranton’s next home game is Saturday, Jan. 27 against the Binghamton Devils. Puck drop between the Penguins and Devils is scheduled for 7:05 p.m. at Mohegan Sun Arena at Casey Plaza. Individual tickets for all Penguins home games are available at the Mohegan Sun Arena at Casey Plaza box office, online at TicketMaster.com, or by calling  800-745-3000.