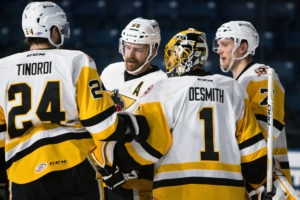 SPRINGFIELD, Mass. – The Wilkes-Barre/Scranton Penguins used a great night on the special teams front to defeat the Springfield Thunderbirds, 3-1, on Wednesday night at MassMutual Center.

In addition to receiving excellent goaltending by Casey DeSmith, Wilkes-Barre/Scranton (29-12-3-1) used two power play goals and an impenetrable penalty kill to earn its first win at MassMutual Center since Feb. 5, 2016.

The first period was a back and forth affair that ended in a scoreless tie. The Thunderbirds had their best opportunity to pull ahead late in the frame when they went on a 1:24-long two-man advantage, but DeSmith came up with a series big with saves, keeping the score knotted at zero.

The teams traded goals in the second frame with Gage Quinney breaking things open at 10:49 of the second period. Quinney raced onto the ice following a line change and ended up in perfect position to receive a pass from Reid Gardiner. However, a mere 2:04 later, Springfield’s Dryden Hunt tied it up, 1-1.

With just 13.1 seconds left in the second period, Wilkes-Barre/Scranton pulled ahead on a power play goal from Thomas Di Pauli. Di Pauli buried his own rebound, snapping a 15-game scoreless drought and putting his team back on top, 2-1.

Late in the third and final frame of regulation with the game still separated by only one goal, DeSmith conjured one of the finest saves made by a Penguins goaltender this year. After a shot from the point created a rebound directly to the left of DeSmith, Ed Wittchow was staring at a wide open net with the puck on his stick. Wittchow threw the puck at the yawning cage, only to see DeSmith reach back with his glove, slap the puck out of midair and away from danger to keep his team in the lead.

The Penguins finished the night two-for-seven on the man advantage, while the Thunderbirds couldn’t capitalize on any of their three power play opportunities.

DeSmith made 23 saves in his return to Wilkes-Barre/Scranton. Springfield goalie Evan Cowley posted 37 saves in defeat.

The Penguins’ next game is Friday, Feb. 9 when they visit the Providence Bruins. Wilkes-Barre/Scranton’s next home game is Saturday, Feb. 17, and they’ll take on the Utica Comets for the first time this season. Puck drop between the Penguins and Comets is scheduled for 7:05 p.m. at Mohegan Sun Arena at Casey Plaza. Individual tickets for all Penguins home games are available at the Mohegan Sun Arena at Casey Plaza box office, online at TicketMaster.com, or by calling 800-745-3000.