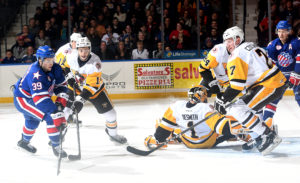 ROCHESTER, N.Y. – The Wilkes-Barre/Scranton Penguins kicked off a three-in-three weekend set on Friday night with a 12-3 loss to the Rochester Americans at Blue Cross Arena.

Wilkes-Barre/Scranton (30-14-3-1) lost three defensemen to injury throughout the course of the game, as Rochester had three different players score twice.

Just 1:17 into the game, the Americans’ Colin Blackwell levied a massive hit on Lukas Bengtsson that left the Penguins blueliner fallen in the corner. Roughly six minutes later, Chris Summers was clipped up high in an awkward collision with two other players. As he slowly got back to his feet and retreated to Wilkes-Barre/Scranton’s bench, Seth Griffith took advantage of the confusion and scored the game’s first goal at 7:06 of the opening frame. Adam Krause and Zach Redmond tallied within 2:09 after Griffith’s goal to catapult Rochester into a 3-0 lead.

Griffith scored for the second time 2:53 into the second period, and the Penguins decided at this point to replace starting goalie Casey DeSmith with Anthony Peters. Shortly into Peters’ tenure between the pipes, Alexander Nylander added another goal to make it 5-0. Nylander’s first goal of the evening marked the third-straight man advantage marker scored by the Americans.

The Penguins made a charge with two strikes separated by a little over two minutes of game time in the second period. A Jarrett Burton goal followed by a brilliant display of passing between Jean-Sébastien Dea and Cody Wydo cut the deficit to only three. Joseph Cramarossa recorded the primary assist on Burton’s goal, giving Cramarossa his first point as a Penguin while skating in his Wilkes-Barre/Scranton debut.

However, Rochester halted that momentum when Brendan Guhle launched a perfect shot under the crossbar 52 seconds after the Wydo goal. Sean Malone closed out the second period reestablishing the Americans’ five-goal lead, giving them a 7-2 edge going into the second intermission.

Wilkes-Barre/Scranton scored a power play goal of its own with Greg McKegg firing one more past Linus Ullmark at the 6:05 mark of the third period, but once again, Rochester shut down any burgeoning momentum as Nylander netted his second of the night a minute later.

Kyle Criscuolo found the back of the net twice followed by goals from Stuart Percy and Matt Tennyson during a five minute stretch in the final frame of regulation, bringing the game to its final score of 12-3.

Frank Corrado left the game after a collision at center ice behind the play felled the fifth-year pro during the third period.

DeSmith recorded 10 saves on 14 shots before being replaced by Peters, who made 15 saves on 23 shots faced. Ullmark posted 35 stops as Rochester snapped a season-long five-game winless skid.

The Penguins’ next game is tomorrow, Saturday, Feb. 17, and they’ll take on the Utica Comets at Mohegan Sun Arena at Casey Plaza for the first time this season. Saturday’s contest is also Wilkes-Barre/Scranton’s annual Military Appreciation Night presented by MetLife. Puck drop between the Penguins and Comets is scheduled for 7:05 p.m. Individual tickets for all Penguins home games are available at the Mohegan Sun Arena at Casey Plaza box office, online at TicketMaster.com, or by calling 800-745-3000.