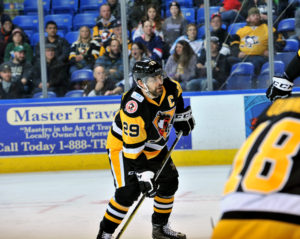 Wilkes-Barre/Scranton (31-15-4-1) received goals from six different players throughout the course of the game, and Tom Kostopoulos recorded two assists in his 700th AHL game.

Joseph Cramarossa got the Penguins on the board first when he collected a rebound and fired it into the IceHogs’ net at 5:36 of the opening period. It marked Cramarossa’s fourth point (2G-2A) in his fourth game with Wilkes-Barre/Scranton since being acquired in a trade on Feb. 14.

Kostopoulos delivered a nifty pass to Daniel Sprong and then set the screen on Jeff Glass as the rookie sniper whipped home a power play goal to put the Penguins up, 2-0, at 8:04 of the first period. The IceHogs struck back a little over two minutes following Sprong’s team-leading 21st tally of the season, cutting their deficit in half. John Hayden spun a shot towards the Penguins’ cage, and Tyler Sikura got just enough of it on a redirect for the puck to slip through Casey DeSmith and make it 2-1.

The Penguins increased their lead back to two in the final minutes of the first period when Gage Quinney shot beat Glass.

After most of the second period came and went without a goal for either side, Wilkes-Barre/Scranton scored the lone tally of the middle frame with only 2:26 remaining before the intermission. Kostopoulos found Garrett Wilson who whistled a shot low along the ice and through Glass’ five-hole, bringing the score to 4-1.

Adam Johnson and Reid Gardiner tacked on goals in the final period, the latter of which notched his first of the season. Rockford fought back with goals by Chris DiDomenico and Anthony Louis in the third, but it was too little too late to combat the Penguins’ earlier offensive surge.

DeSmith denied 24 shots for the win, while Glass made 19 saves on the night.

The Penguins’ next game is tomorrow, Saturday, Feb. 24, when they take on the Syracuse Crunch at Onondaga County War Memorial. Wilkes-Barre/Scranton’s next home game is Sunday, Feb. 25, and its opponent will be the Hershey Bears. Sunday’s game is also a Kids Free Sunday, with all children age 14 and under can enter the contest free of admission with the paid purchase of an adult ticket.

Puck drop between the Penguins and Bears is scheduled for 3:05 p.m. Individual tickets for all Penguins home games are available at the Mohegan Sun Arena at Casey Plaza box office, online at TicketMaster.com, or by calling 800-745-3000.