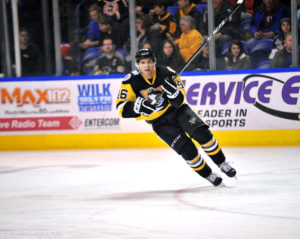 SYRACUSE, N.Y. – The Wilkes-Barre/Scranton Penguins had a tough time finding the back of the net in a Saturday night showdown that ended in a 3-1 loss to the Syracuse Crunch at Oncenter War Memorial Arena.

Wilkes-Barre/Scranton (31-16-4-1) scored early but saw its opponent use shorthanded and power play goals to earn the victory.

Things got off to a promising start for the Penguins when Freddie Tiffels struck on the team’s second shot of the game. Gage Quinney fed Tiffels who was wide open in the slot, and the German rookie roofed it at 4:24 for his second goal of the season, both of which have come against the Crunch.

Syracuse started the second period on the penalty kill, but managed its AHL-leading 11th shorthanded goal of the season as Gabriel Dumont drove to the net and tied it up, 1-1.

The Crunch eventually built a 22-4 shot advantage on the Penguins, only for Wilkes-Barre/Scranton to turn the tide and go on an 8-2 run in shots on goal. Despite the influx of chances, the rest of the middle frame came and passed without a goal. The score remained even heading into the final frame of regulation.

Syracuse scored on their first two bids of the third period, the first of which at 6:02 as Alexander Volkov coasted through the neutral zone, picked up a loose puck and beat Anthony Peters on the backhand. The Crunch added a power play tally on a redirect by Anthony Cirelli 2:44 later, making it 3-1.

The Penguins pulled Peters for an extra attacker with 100 seconds left in regulation and were even given a power play for a late six-on-four man advantage, but never mustered a goal.

Peters made 33 saves, included making 17 stops on 17 shots faced in the first period, while Connor Ingram faltered only once on 27 pucks sent his way.

The Penguins’ next game is tomorrow, Sunday, Feb. 25, when they face-off against the Hershey Bears. Sunday’s game is also a Kids Free Sunday, with all children age 14 and under can enter the contest free of admission with the paid purchase of an adult ticket. Puck drop between the Penguins and Bears is scheduled for 3:05 p.m. Individual tickets for all Penguins home games are available at the Mohegan Sun Arena at Casey Plaza box office, online at TicketMaster.com, or by calling 800-745-3000.