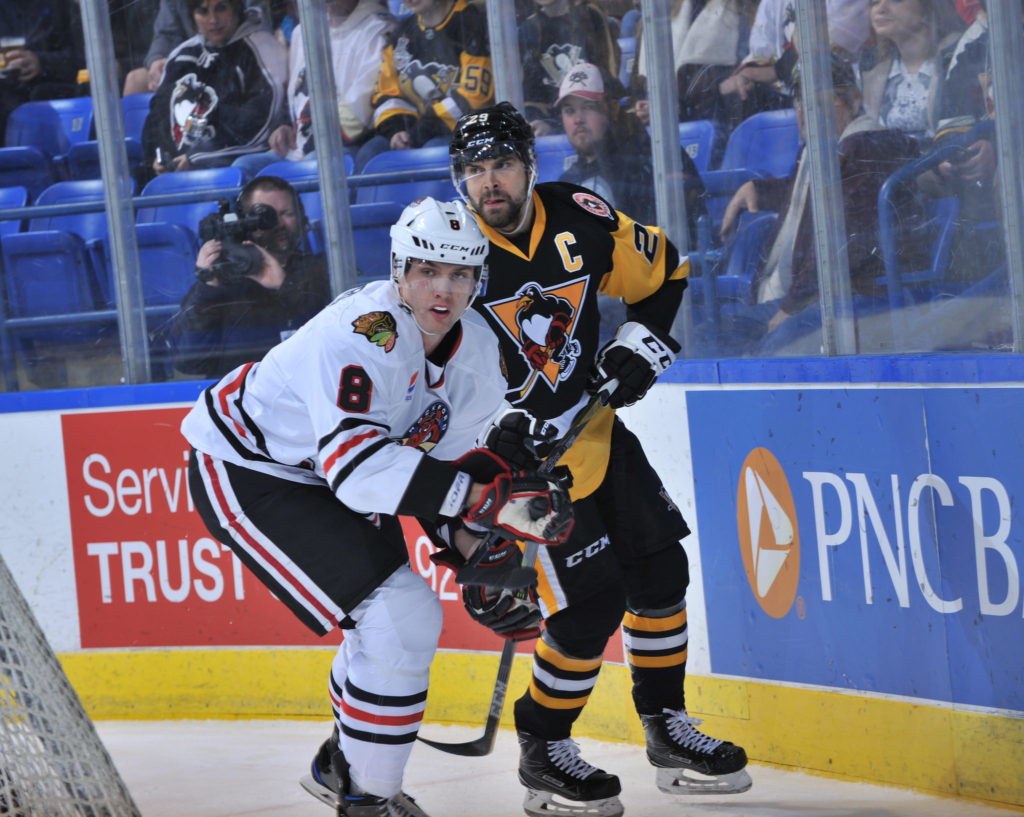 For the first time in franchise history, the Wilkes-Barre/Scranton Penguins visit the Rockford IceHogs on Saturday night at BMO Harris Bank Center.

Saturday’s game is the second of two meetings between the clubs this season.

The Penguins made their first visit to Van Andel Arena in almost a decade and left with a 4-2 victory in tow, beating the Grand Rapids Griffins on Friday night. It took Wilkes-Barre/Scranton until 7:58 of the third period to grab its first lead of the game, but it managed to hold the defending Calder Cup Champions to just 19 shots throughout the course of the contest. The Griffins received goals from Matt Puempel and Eric Tangradi, while the Penguins saw scoring from Adam Johnson, Garrett Wilson (2), Teddy Blueger. The Griffins pressured the Penguins greatly with the goalie pulled in favor of an extra attacker, but Wilkes-Barre/Scranton staved off a tying tally and sealed the victory with an empty net goal from Wilson. Anthony Peters recorded 17 saves in the win.

Frederick Allard converted on a turnover for the game-winning goal with just over five minutes remaining, and the Milwaukee Admirals put the game out of reach with two more late tallies, leading to a 4-1 victory over the IceHogs Friday night at the UW-Milwaukee Panther Arena. Cody Franson scored the IceHogs’ lone goal of the game, one-timing a pass from Tyler Sikura at 15:16 in the second period to tie the contest at 1-1. Rockford netminder Jeff Glass stopped eight of 11 pucks in the loss.

The Penguins are undefeated against Central Division teams so far this season (3-0-0-0). After winning last night, they have now defeated Grand Rapids, Rockford and Milwaukee.

Daniel Sprong is tied for second among AHL rookies with 21 goals and third among first-year skaters with 44 points. He’s also tied for 10th overall in the league in goals and tied for 15th in points.

After going 13 games without a point, Adam Johnson has four goals and six points in his past five contests.

With his game-winner last night, Teddy Blueger has now tied Daniel Sprong for the team lead with four GWGs.

With an assist on Wednesday against the Texas Stars, Adam Clendening set the IceHogs all-time records for both points and assists for a Rockford defenseman. Clendening notched his 135th point and 111th assist of his IceHogs tenure.

Matthew Highmore potted his 21st goal of the year last weekend against the Hershey Bears, setting the team’s AHL franchise record for rookie goals in a single season. Highmore surpassed Tanner Kero’s previous record of 20 goals from the 2015-16 season.

CONNECTIONS
Adam Clendening spent six games with Wilkes-Barre/Scranton in 2015-16 notching three assists and a plus-4.