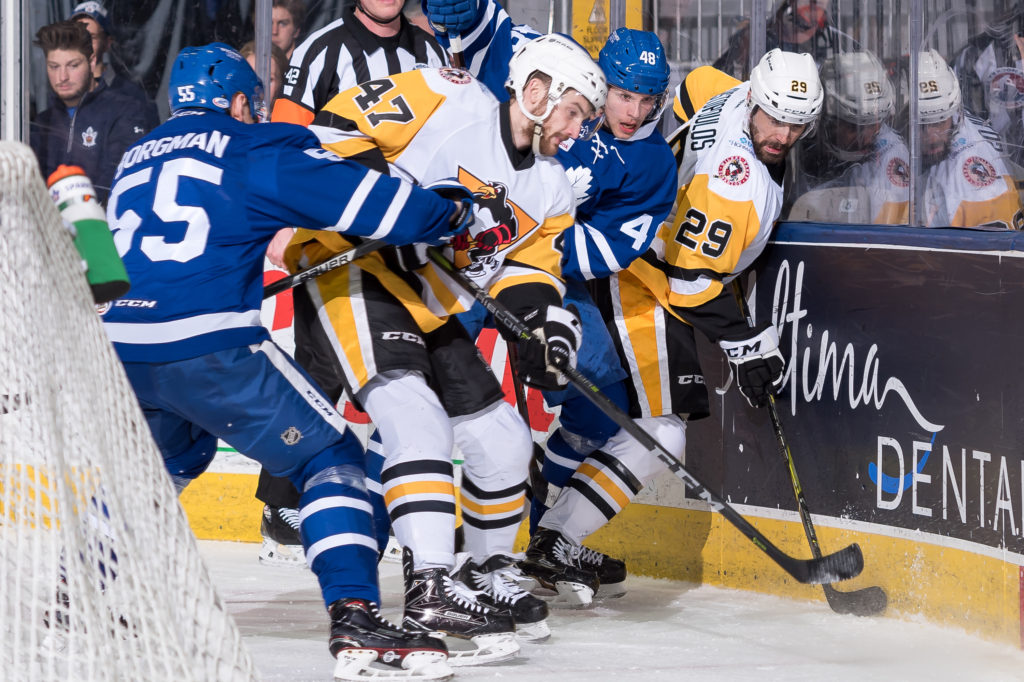 TORONTO, Ont. – The Wilkes-Barre/Scranton Penguins put forth a strong offensive effort in a match-up with the Toronto Marlies with 40-shots and twice coming from behind, but still lost in overtime, 4-3, at Ricoh Coliseum on Tuesday night.

Wilkes-Barre/Scranton (37-19-5-2) matched the AHL’s top ranked team throughout regulation, and still earned a valuable point in the standings with the loss in extra time.

Toronto got the game’s first goal midway through the first period. Kyle Baun won the puck from the Penguins defense below the goal line, then banged in a rebound beside Tristan Jarry.

On their second man advantage of the night, the Marlies’ Andrew Nielsen capitalized and put his squad up, 2-0, at 15:37 of the opening frame. However, two minutes later, Daniel Sprong stripped Toronto defenseman Martin Marinčin of the puck right at the Marlies’ net-mouth and notched his team-leading 23rd goal of the season to pull the Penguins within one.

After Sprong’s turnover tally, Wilkes-Barre/Scranton ended the period with a fury of shots, but goaltender Garret Sparks weathered the storm. The Penguins’ momentum carried into the second period, and Sparks was solved once again when Garrett Wilson tied things up on a tipped shot 1:42 into the middle frame.

Heading into the second intermission, the Penguins had mustered 31 shots on goal, but were still trailing by one goal.

Early in the third period, Ethan Prow evened the score with a big blast from the blue line that navigated through traffic and past Sparks at 3:49 of the final frame of regulation.

Toronto turned up the heat after Prow’s equalizer, but it became Jarry’s turn to stifle an opponent’s bevy of scoring opportunities. Jarry, making his first net appearance for Wilkes-Barre/Scranton since Feb. 3, denied all 15 of the Marlies’ shots in the third period to help his team force overtime.

The Marlies emerged victorious in the extra frame as Adam Brooks put the game away on a two-on-one 1:17 into OT.

Jarry recorded 36 saves on the night, while Sparks was one better with 37.

The Penguins’ next game is Friday, Mar. 23 when they visit the Utica Comets. Wilkes-Barre/Scranton’s next home game is against the Bridgeport Sound Tigers on Sunday, Mar. 25. Puck drop between the Penguins and Sound Tigers is scheduled for 3:05 p.m. at Mohegan Sun Arena at Casey Plaza. Individual tickets for all Penguins home games are available at the Mohegan Sun Arena at Casey Plaza box office, online at TicketMaster.com, or by calling 800-745-3000.

PENGUINS FALL IN SHOOTOUT TO PHANTOMS, 2-1