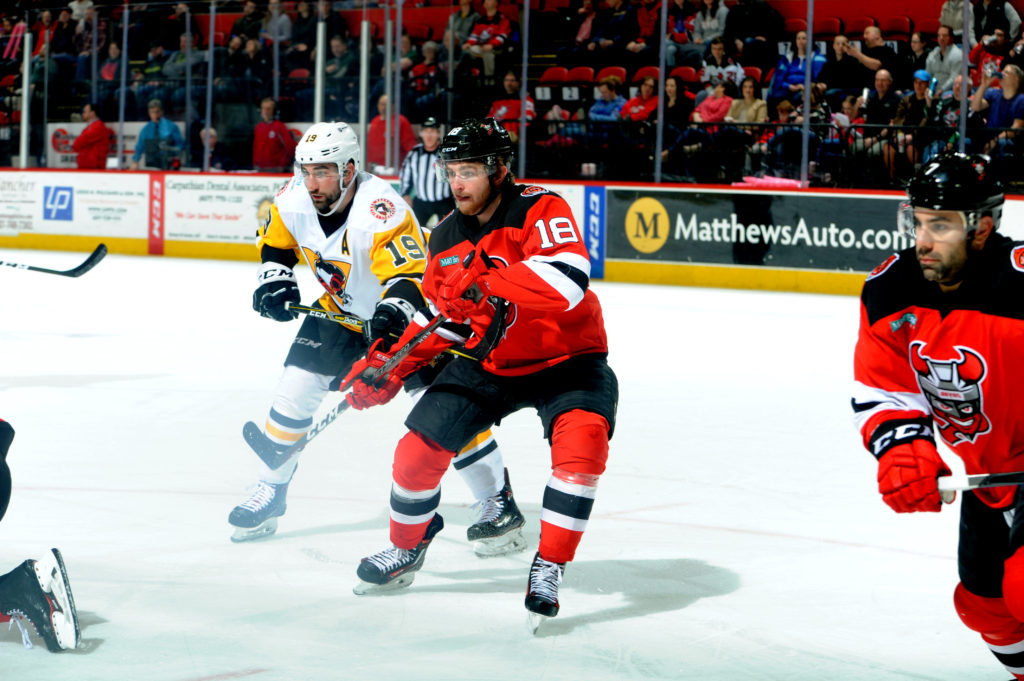 BINGHAMTON, N.Y. – The Wilkes-Barre/Scranton Penguins scored early and often through the first half of the game, but still needed the shootout to nab a 5-4 win over the Binghamton Devils at Floyd L. Maines Veterans Memorial Arena on Saturday night.

Wilkes-Barre/Scranton (38-19-6-2) got a big game from Garrett Wilson, including the game-winning goal in the eighth round of the shootout, so it could remain unbeaten in five games against Binghamton this season.

The Penguins got off to a quick start by tallying the first goal of the night just 1:14 into the contest. Jarred Tinordi ripped a shot from the point that beat Mackenzie Blackwood over the shoulder for a career-best fourth goal of the season. The lead was short-lived though, as the Devils’ Jacob MacDonald scored just 2:10 later to tie it up, 1-1.

Joseph Cramarossa sniped a shot bar-down just before the halfway point of the first period to put Wilkes-Barre/Scranton back on top, 2-1.

The Penguins extended their lead to 3-1 and got a monkey off their back with a power play goal, their first in 18 attempts against the Devils. Andrey Pedan snapped one past Blackwood with Wilson setting a blinding screen in front at 6:38 of the second period. Wilkes-Barre/Scranton added another goal at the 13:39 mark of the middle frame when another Pedan shot from the point was tipped in by Wilson.

With less than 30 seconds left in the second period, Binghamton cut their deficit down to two thanks to a man advantage marker set up by Bracken Kearns to Nick Lappin.

The Devils carried the momentum of the late power play goal through the intermission, reducing the Penguins’ lead to 4-3 a little over two minutes into the third period. Wilkes-Barre/Scranton defenseman Zach Trotman broke up a centering pass sent across the net-mouth, but the bouncing puck then hopped onto Blake Speers’ stick, and the rookie rifled it past Michael Leighton.

Binghamton finally pulled even at 10:29 of the third period as Mario Lucia came down the right wing on a two-on-one rush and ripped a shot into the Penguins’ net.

The Devils even had an opportunity to take their first lead of the game when Andrey Pedan was assessed a four-minute double minor for high-sticking with 5:59 left in regulation. However, the Penguins put forth a textbook penalty killing performance and forced the game to overtime for their third game in a row.

Daniel Sprong scored the shootout’s first goal on the Penguins’ third attempt, but with the game on the line, the Devils’ John Quenneville responded in kind immediately thereafter. Both teams were turned aside by the opponent’s netminder until round eight, where Wilson put one over Blackwood’s shoulder for the victory.

Leighton made 37 saves in regulation and overtime before denying the Devils on seven of their eight shootout bids. Blackwood turned aside 28 of the Penguins’ 32 shots on goal and made six stops in the shootout.

The Penguins’ next game is tomorrow, Sunday, Mar. 25, when they take on the Bridgeport Sound Tigers at Mohegan Sun Arena at Casey Plaza. Tomorrow’s tilt with the Sound Tigers is also a Kids Get In Free Sunday. Children aged 14 and under can attend the game free of charge with the paid purchase of an adult ticket.

Puck drop between the Penguins and Sound Tigers is scheduled for 3:05 p.m. Individual tickets for all Penguins home games are available at the Mohegan Sun Arena at Casey Plaza box office, online at TicketMaster.com, or by calling 800-745-3000.