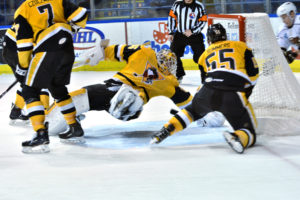 WILKES-BARRE, Pa. – The Wilkes-Barre/Scranton Penguins fended off a late comeback attempt by the Hershey Bears to defeat their I-81 rival, 5-3, at Mohegan Sun Arena at Casey Plaza on Tuesday night.

Tristan Jarry backstopped Wilkes-Barre/Scranton (41-21-6-2) to victory in a game that saw Sam Lafferty score his first professional goal and the Penguins improve to 9-0-1-1 against the Bears this season. Also, with the win, the Penguins have reduced their magic number to clinch a berth in the 2018 Calder Cup Playoffs to one.

The Penguins wasted little time in scoring the game’s first goal as Teddy Blueger fired a spin-o-rama backhander through Pheonix Copley’s five-hole 53 seconds into the game.

Hershey tied things up at 13:41 of the opening frame when Connor Hobbs unloaded a perfectly placed one-timer underneath the cross-bar. However, Wilkes-Barre/Scranton re-established its lead exactly two minutes later. The Penguins responded when Daniel Sprong tapped the puck over to Garrett Wilson in the slot, who then beat Copley down low once again.

Midway through the second period, Lafferty ripped a snapshot past the blocker of Copley, giving the Penguins a 3-1 lead. The Hollidaysburg, Pennsylvania native’s first goal as a pro caused a goaltending change for the Bears, too. Copley stepped out and was relieved by Vítek Vaněček.

The goaltending switch and two-goal deficit motivated Hershey, but the visitors couldn’t muscle anything past Jarry despite a flurry of scoring chances in the second half of the middle frame. Jarry made a series of highlight reel saves, featuring a sprawling save for which he fell on his back and reached around his head to the far post so that he could rob Colby Williams of a sure goal. Jarry’s lights-out goaltending maintained the home team’s 3-1 lead going into the second intermission.

Sprong cashed in on the power play with his AHL rookie-leading 28th goal of the season to give the Penguins a three-goal lead 4:32 into the final period.

Hershey made things interesting by using goals from Anthony Peluso and Mathias Bau three minutes apart to pull within one. The Bears were also given a power play opportunity with less than a minute to go in regulation. Their late power play only yielded an empty net goal for Jean-Sébastien Dea to round out the night’s scoring at 5-3.

Jarry made 30 saves in the win for the Penguins. Copley was replaced after denying 12 of 15 shots faced, while Vaněček stepped in to turn aside 13 of the 14 bids Wilkes-Barre/Scranton threw his way.

The Penguins’ next game is Friday, Apr. 6 against the Bridgeport Sound Tigers with a chance to secure a spot in the postseason. Puck drop between the Penguins and Sound Tigers is scheduled for 7:05 p.m. at Mohegan Sun Arena at Casey Plaza.