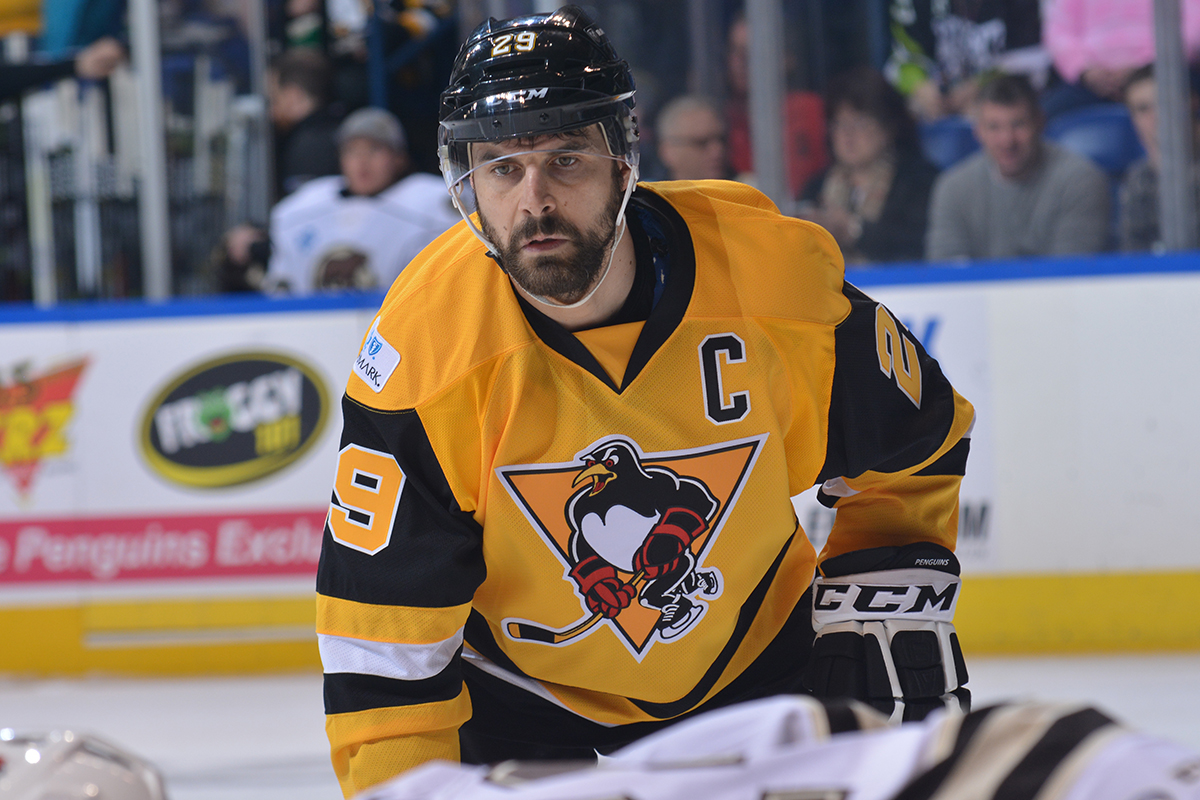 Wilkes-Barre/Scranton Penguins captain Tom Kostopoulos has announced that he will retire from playing following the 2017-18 season, his 19th season of professional hockey.

“I’ve been lucky to make a living playing the game I love for the past 19 seasons,” said the 39-year old Kostopoulos. “I’ve enjoyed every minute of it, but I’m looking forward to spending more time with my wife, Lisa, and kids, Lily and Luc, away from the rink.”

“No player has meant more to the Wilkes-Barre/Scranton Penguins, or represented the organization better, than Tom Kostopoulos,” said team CEO Jeff Barrett. “His commitment to the team, his teammates, the fans and the local community make him a truly unique individual, and one we are extremely lucky to have known for almost 20 years.”

A native of Mississauga, Ontario, Kostopoulos was selected in the seventh round (204th overall) of the 1999 National Hockey League draft by the Pittsburgh Penguins. He made his professional debut with Wilkes-Barre/Scranton on October 12, 1999 on the road against the St. John’s Maple Leafs. 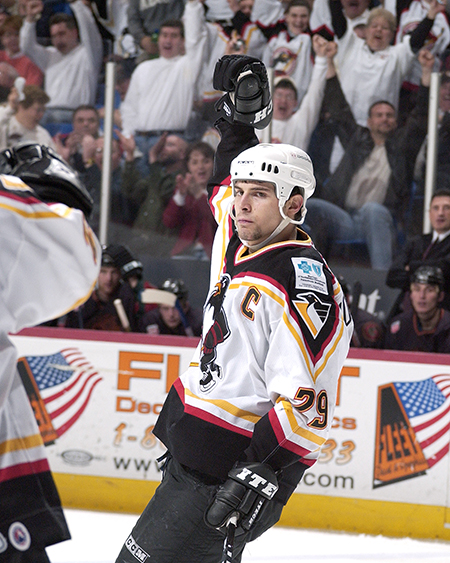 Kostopoulos placed second on the Penguins with 26 goals, 32 assists and 56 points as a rookie during the team’s inaugural 1999-2000 campaign, and finished third on the club the following year with 52 points (16+36) while appearing in all 80 regular season games.

In his third season, Kostopoulos paced Wilkes-Barre/Scranton with 27 goals and 53 points in 70 games, and was selected to the Canadian All-Star Team for the 2002 AHL All-Star Classic. He also appeared in 11 contests with the Pittsburgh Penguins, recording a goal in his NHL debut against the Ottawa Senators on December 29, 2001.

Kostopoulos led the team with 42 assists, and ranked second with 63 points, during the 2002-03 campaign, and appeared in eight games with the NHL Penguins. He spent the majority of the 2003-04 regular season with Pittsburgh, posting 22 points (9+13) in 60 games, while also putting up 20 points (7+13) in 21 games with Wilkes-Barre/Scranton. He then led the AHL club with 23 points (7+16) in 24 postseason games, guiding the Penguins to their second appearance in the Calder Cup Finals.

Kostopoulos suited up for the Manchester Monarchs during the 2004-05 NHL lockout season, recording 71 points (25+46) in 64 contests.

Kostopoulos returned to NEPA on January 23, 2013, singing a professional tryout contract with the Penguins. He recorded his 100th goal in a Wilkes-Barre/Scranton uniform on March 1 against the Hershey Bears.

Kostopoulos signed a one-year contract with Pittsburgh after appearing in 17 games with Wilkes-Barre/Scranton, but was claimed off of waivers by the New Jersey Devils on March 6. He finished out the 2012-13 season by appearing in 15 games with the Devils, picking up one goal and 18 penalty minutes. 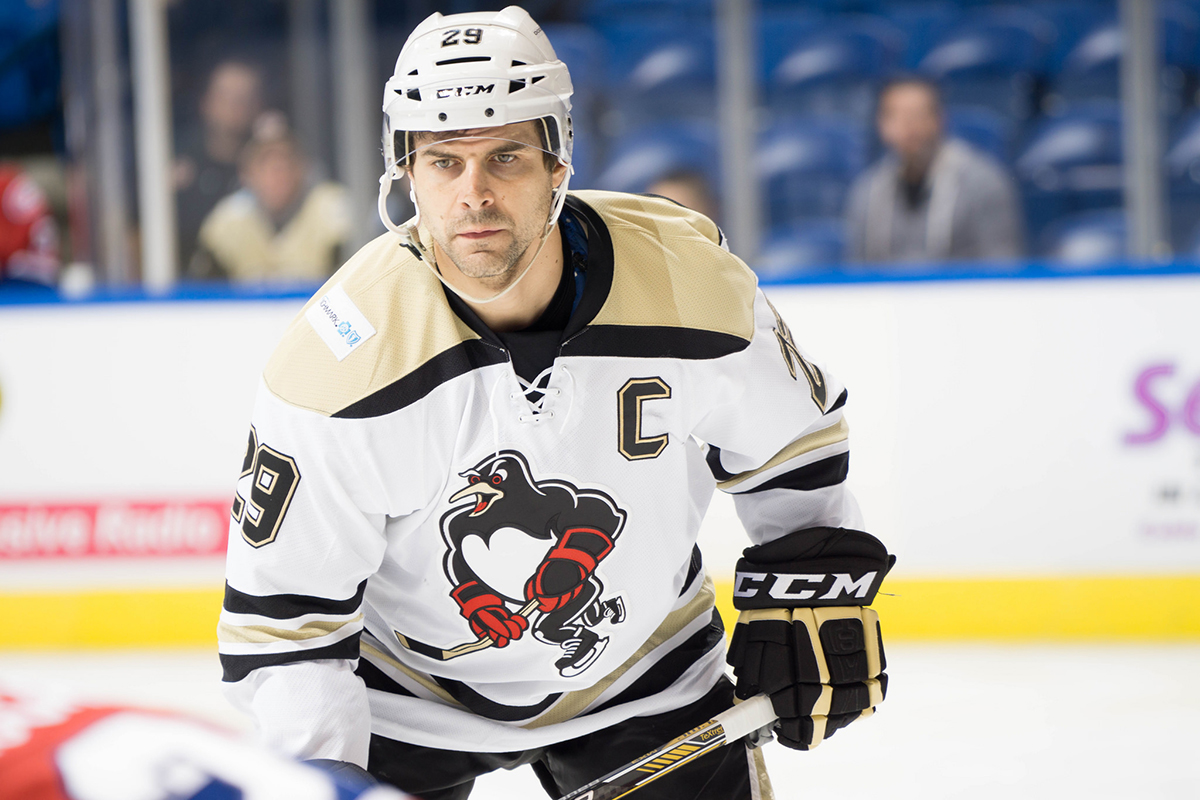 The following off-season, Kostopoulos signed an AHL only deal with Wilkes-Barre/Scranton, and has spent the past five seasons with the Penguins. He paced the team with 22 goals and 47 points in 2013-14; represented the Penguins at the 2015 AHL All-Star Classic in Utica, serving as team captain for the Eastern Conference; and again led the team with 54 points (24+30) during the 2016-17 season.

Kostopoulos was named the recipient of the AHL’s Fred T. Hunt Memorial Award for sportsmanship, determination and dedication to hockey in 2016, and became just the fourth player all-time to appear in 600 games in both the AHL and NHL when he suited up against the Lehigh Valley Phantoms on February 4, 2017.

Limited to 26 games so far this season, Kostopoulos appeared in his 650th game with Wilkes-Barre/Scranton on March 28 against the Providence Bruins.

Fans will have a chance to show Kostopoulos their appreciation, as the Penguins close out their 2017-18 regular season home schedule with games this Friday against the Bridgeport Sound Tigers and Saturday against the Binghamton Devils. Tickets for both games are available at the Mohegan Sun Arena box office, online at TicketMaster.com, or by calling the Penguins at 570-208-7367.