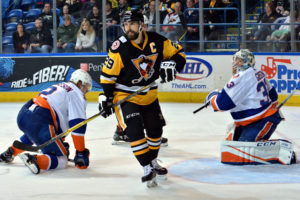 Daniel Sprong put forth a goal and two power play assists to keep Wilkes-Barre/Scranton (41-22-6-2) within striking distance, but a Bridgeport team fighting to keep its slim playoff hopes alive had the extra vigor to hang on when it was all said and done.

The Penguins took the lead 4:48 into the game when captain Tom Kostopoulos cashed in on the man advantage. Sprong unloaded a one-timer towards the net, which Kostopoulos tipped past goaltender Christopher Gibson.

Shortly thereafter, Bridgeport answered back with a power-play goal of its own. Mitchell Vande Sompel picked the short side corner over the shoulder of Tristan Jarry, evening the game at one goal apiece.  Then Steve Bernier gave the visitors their first lead of the night at 11:45 of the opening frame.

Vande Sompel later scored his second goal of the night, once again beating Jarry to the short side and just inside post. Vande Sompel’s first career multi-goal game put the Sound Tigers up, 3-1, just under five minutes into the second stanza.

Sprong pulled the Penguins within one again by unloading a wicked one-timer on a set face-off play. Teddy Blueger won the draw clean to Sprong who blasted the puck into the opposite top corner at 7:50 of the second period.

Sprong’s goal nearly served as a turning point in the contest, as Wilkes-Barre/Scranton began peppering Gibson with shot after shot following the rookie’s team-leading 29th goal of the season. The Penguins almost doubled the Sound Tigers’ shot total in the middle frame, throwing 13 pucks at the net. Gibson held down the fort with some dazzling saves so that his squad could enter the second intermission with the one-goal lead.

Ben Holmstrom tipped in a cross-crease pass from Kyle Schempp eight minutes into the third period, extending the Sound Tigers’ lead to 4-2.

The Penguins reduced the deficit down to one yet again when Blueger tipped in one of Sprong’s shots during a power play late in the final frame. Down by one and with the goalie pulled for an extra attacker, Wilkes-Barre/Scranton couldn’t muster the equalizer, despite two great scoring chances for Sprong.

In the end, Jarry stopped 18 shots while Gibson recorded 25 saves on the night.

The Penguins’ next game is tomorrow, Saturday, Apr. 7, against the Binghamton Devils. Saturday’s game is also Wilkes-Barre/Scranton’s final home game of the regular season and will serve as the team’s annual Fan Appreciation Night. Pre-game ceremonies prior to the contest between the Penguins and Devils are scheduled to begin 7:00 p.m. at Mohegan Sun Arena at Casey Plaza.

PENGUINS EDGED BY BEARS IN SHOOTOUT, 3-2