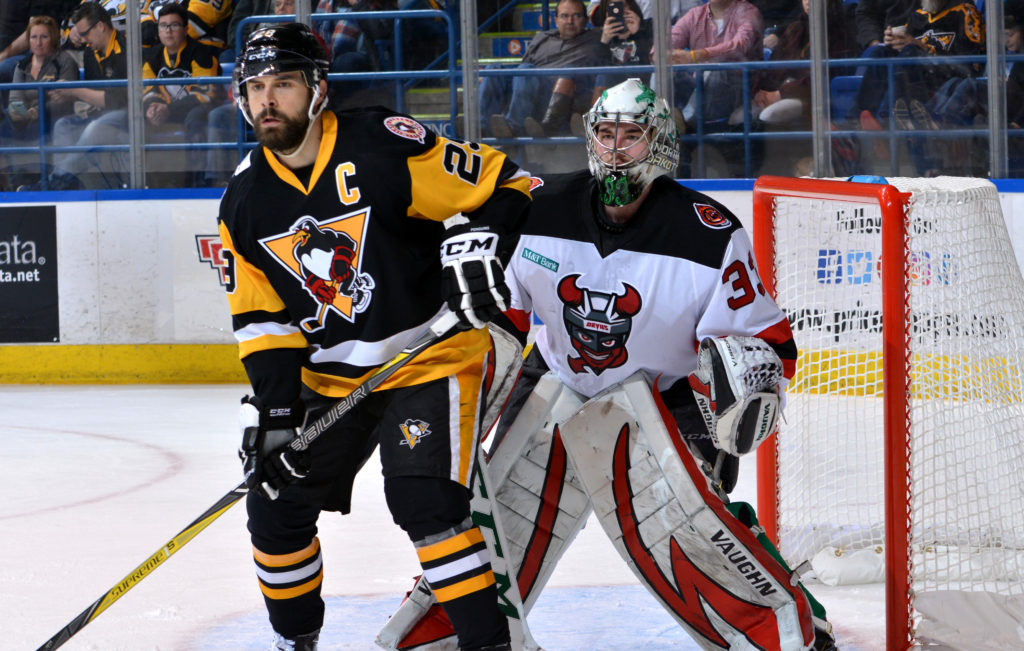 WILKES-BARRE, Pa. – It was an emotional night at Mohegan Sun Arena at Casey Plaza on Saturday. Tom Kostopoulos was playing in his final regular season home game with the Wilkes-Barre/Scranton Penguins, and the emotion fueled the team to a 7-4 victory over the Binghamton Devils.

Wilkes-Barre/Scranton (42-22-6-2) also clinched a berth in the 2018 Calder Cup Playoffs with Saturday’s results. This will be the Penguins’ 16th postseason appearance in a row, the American Hockey League’s active record.

Clearly running on adrenaline after pre-game ceremonies honoring Kostopoulos, the home team took a 4-0 lead in the first period starting with a power play goal 3:45 into the contest. Jean-Sébastien Dea pulled off a spinning move at the front of the net and tucked the puck around goaltender Cam Johnson, who was making the first start of his pro career. Nineteen seconds later, Tom Sestito beat Johnson down low to put the Penguins up, 2-0.

Jarrett Burton tacked on a goal by batting in his own rebound that came off the crossbar midway through the opening frame, and Zach Trotman unloaded a slap shot that navigated under Johnson with 3:24 left in the period.

Binghamton’s Jake Walman got the visitors on the board midway through the second period with a wicked wrist shot that whizzed past the blocker of Michael Leighton. Walman proceeded to set up the Devils’ next goal, too, tossing a shot towards the net that was tipped in by Blake Pietila at 18:05 of the middle frame.

Wilkes-Barre/Scranton wasted no time in re-establishing their four-goal lead, using goals from Daniel Sprong and Christian Thomas in the first 5:44 of the third period. Sprong’s 30th goal of the season arrived 35 seconds into the final frame of regulation, and Thomas notched his third point of the night with the tally that made it 6-2.

However, the Devils stormed back in the second half of the third period, as tucks by Jacob MacDonald and Jan Mandát reduced the deficit to two goals once again.

Binghamton elected the pull the goalie for an extra attacker with over three minutes left in regulation. Thomas put the icing on the cake with an empty net goal to close out the scoring at 7-4, his fourth point of the game.

Leighton denied 26 Devils shots as he improved to 5-0-0 with Wilkes-Barre/Scranton. Johnson made 29 saves in his pro debut.

The Penguins’ next game is tomorrow, Sunday, Apr. 8, when they travel to Bridgeport to take on the Sound Tigers for the final time this season.