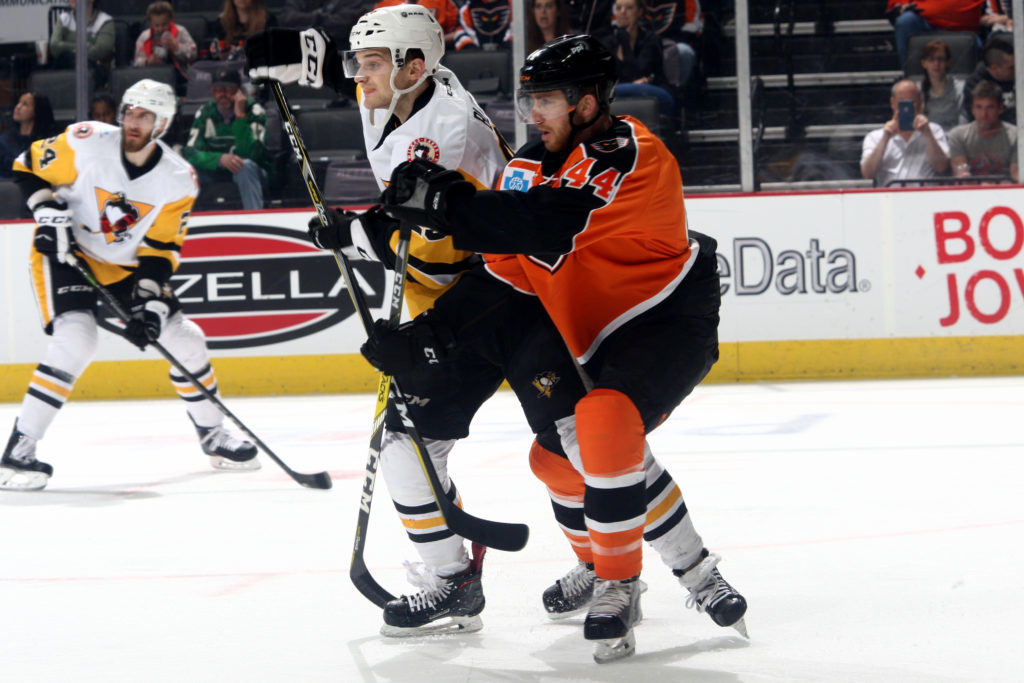 ALLENTOWN, Pa. – Both the Wilkes-Barre/Scranton Penguins and Lehigh Valley Phantoms traded goals in the last two minutes of regulation, but the Phantoms came out on top in a shootout, 2-1, on Saturday night at PPL Center.

With their point earned in the standings, Wilkes-Barre/Scranton (44-22-6-3) was able to secure home ice in the first round of the 2018 Calder Cup Playoffs. The Penguins will play as the No. 2 seed for the Atlantic Division in the postseason, even though their first round opponent is still to be determined.

The first period featured a strong defensive effort by both teams, keeping the game scoreless and without grade-A scoring chances for either side.

In the middle frame, the Penguins nearly doubled the Phantoms in shots. Wilkes-Barre/Scranton earned a 11-6 shot advantage in the second period, but both goalies remained strong. Alex Lyon held down the fort for the Phantoms, while Michael Leighton came up with a series of solid stops for the Penguins.

The Phantoms nearly generated a breakaway opportunity midway through the second period, but defenseman Niclas Almari stepped in to neutralize the headman pass. Almari, making his AHL debut, was the last line of defense on the sequence for the Penguins, but calmly clogged up the passing lane that would have otherwise resulted in a clean chance for Lehigh Valley’s Cole Bardeau.

Leighton also helped power the Penguins to kill off a double minor penalty in the middle frame, too, making numerous key saves to keep the score even at 0-0.

The third period yielded the best scoring chances for both the Penguins and Phantoms, but time and time again, they were foiled by the opposing netminder. The game appeared poised for a scoreless regulation until Garrett Wilson cracked the goose egg for Wilkes-Barre/Scranton late in the contest. With 1:50 left in the third period, Wilson muscled a loose puck under Lyon’s pad for the game’s first goal.

However, the goal was not enough as Chris Conner came back a minute later, scoring for Lehigh Valley with the goalie pulled and extra attacker activated with 45.2 seconds remaining in regulation.

The tight defense continued through the overtime period, as each team only surrendered two shots and allowed no goals.

Nic Aubé-Kubel scored the only goal of the shootout in the fourth round, granting Lehigh Valley the victory in its last game of the season.

Leighton made 30 saves on the night and denied three Phantoms attempts in the shootout, while Lyon turned aside 26 shots in regulation and overtime and went four-for-four on saves in the shootout.

The Penguins have one more game left in the regular season. They’ll take on the Hershey Bears at Giant Center tomorrow, Sunday, Apr. 15, at 5:00 p.m. for both clubs’ regular season finale.

Ticket packages and individual game tickets for the 2018 Calder Cup Playoffs are now on sale. With the purchase of a postseason ticket package, fans will receive a $6 food/merchandise voucher for every game played in the playoffs. Wilkes-Barre/Scranton fans can secure their seats for every game on the Cup run by contacting the Penguins directly at (570) 208-7367.

PENGUINS LOSE TIGHT ONE TO P-BRUINS