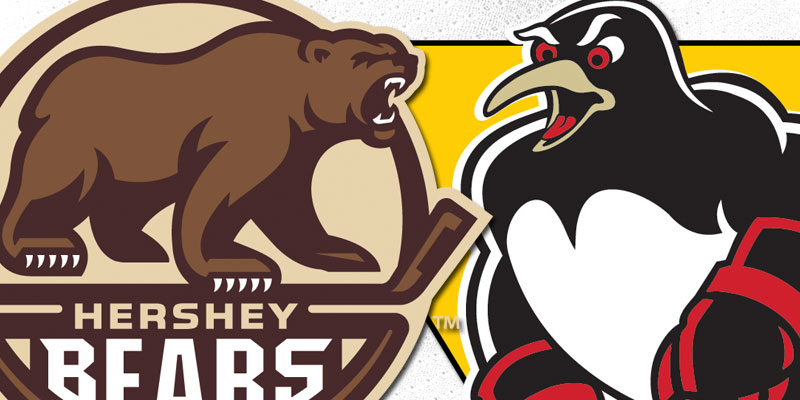 The Wilkes-Barre/Scranton Penguins 2017-18 regular season wraps up against their instate rival, the Hershey Bears, at Giant Center today at 5:00 p.m.

Today’s game is the 12th and final meeting between the clubs this season.

The Penguins and Lehigh Valley Phantoms traded goals in the final two minutes of regulation, but the Phantoms came out on top in a shootout, taking a 2-1 win, on Saturday night at PPL Center. Garrett Wilson cracked the goose egg for Wilkes-Barre/Scranton late in the contest, but the goal was not enough as Chris Conner came back with the equalizer for Lehigh Valley a minute later. Nic Aubé-Kubel scored the only goal of the shootout in the fourth round, granting Lehigh Valley the victory in its final game of the season. Michael Leighton made 30 saves on the night and denied three Phantoms attempts in the shootout, while Alex Lyon turned aside 26 shots in regulation and overtime and went four-for-four on saves in the shootout.

The Bears returned home and wrapped up the season series with the Bridgeport Sound Tigers with a 2-1 win on Saturday at Giant Center. Hershey dictated the majority of play and grabbed an early 1-0 lead with a goal from Jonas Siegenthaler. Mathias Bau scored the game-winner in the second, while Bears goaltender Vitek Vanecek’s work load remained light with only four additional required stops in the second period. Bridgeport ended Vanecek’s bid for his third shutout of the season when Casey Bailey snapped a quick shot past the Hershey netminder at 5:17 of the third period.

Daniel Sprong established a new franchise record for goals by a rookie with his 31st tally of the season on Friday night in Springfield.

Despite only playing in nine of the 11 matchups between the Penguins and Bears this season, Daniel Sprong leads the series in points with 14 (5+9).

The Penguins continue to be tough to beat with a third period lead, going 28-1-1-0 on the season when leading after two frames.

Chris Summers played in the 450th game in his AHL career Saturday night.

Defenseman Connor Hobbs has collected five points (1+4) in his past three games. He posted the first multi-point game of his career (1+2) last Tuesday in Wilkes-Barre/Scranton, then returned to the ice Saturday in Charlotte with two assists. Hobbs has registered 16 points (3+13) in 42 games during his rookie season.

CONNECTIONS
Penguins forward Christian Thomas spent the 2016-17 season with the Bears, and led the team in goals (24) and power play goals (12).  His goals, assists (25) and points (49) totals were all career highs.

Bears center Zach Sill spent parts of five seasons with Wilkes-Barre/Scranton, and ranks sixth on the team’s all-time list with 277 games played. Sill recorded 73 points (33+40) and 315 penalty minutes with the Penguins between 2009 and 2014.