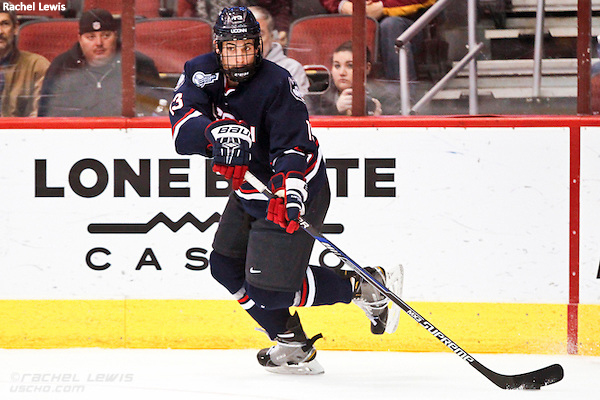 WILKES-BARRE, Pa. – The Wilkes-Barre/Scranton Penguins announced today that they have signed defenseman Joseph Masonius to an American Hockey League contract for the 2018-19 season. Masonius will join the Penguins immediately on an amateur tryout agreement for the remainder of the 2018 Calder Cup Playoffs.

The 21-year-old rearguard just finished his junior season at the University of Connecticut. He wrapped up his collegiate career with 10 goals and 40 assists for 50 points in 96 total games. Masonius led all Huskies defensemen in points in two of his three seasons at UConn.

The native of Spring Lake, New Jersey was drafted by the Pittsburgh Penguins in the sixth round (181st overall) of the 2016 NHL Entry Draft. Prior to being selected by Pittsburgh, he was groomed for two seasons at the United States National Tem Development Program. During his time with the USNTDP, Masonius was under the tutelage of current Wilkes-Barre/Scranton assistant coach, J.D. Forrest.

The Penguins begin their opening round series of the 2018 Calder Cup Playoffs against the Charlotte Checkers tomorrow, Friday, Apr. 20, at Bojangles’ Coliseum. The series returns to the Penguins’ home ice for Game 3 on Thursday, Apr. 26 at Mohegan Sun Arena at Casey Plaza.