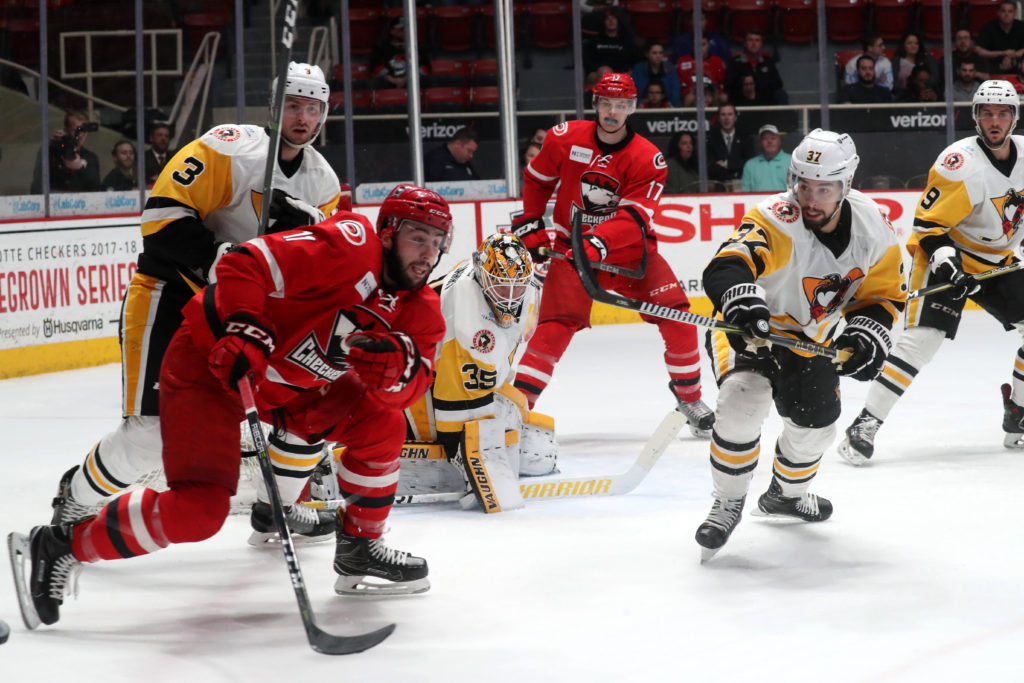 CHARLOTTE, N.C. – The Wilkes-Barre/Scranton Penguins dropped Game One of the Atlantic Division Semifinals to the Charlotte Checkers in overtime at Bojangles’ Coliseum on Friday night.

Wilkes-Barre/Scranton had a 2-0 lead going into the third period, but Charlotte scored twice to tie and then got an early, albeit controversial goal from Lucas Wallmark in the extra period to win, 3-2.

The Checkers had the Penguins pinned back in their zone for well over a minute when Brenden Kitchton’s point shot was tipped in by Wallmark. As a throng of bodies congregated around Tristan Jarry, contact was made with the Penguins goalie that sent him tumbling down to the ice at the same time as Wallmark’s tip. Jarry and his teammates protested the call, clamoring for goaltender interference, but the initial assessment on the ice stood, and Charlotte got the game-winner at 3:18 of overtime.

The game started with a first period marred by penalties. The two clubs combining for six man advantage opportunities over the course of the opening 20 minutes of play, but the Penguins were the only team to capitalize on the power play. Andrey Pedan’s slap shot from the point blistered past a screen set by Garrett Wilson at the front of the net and into Charlotte’s cage with 2:16 left in the first period.

Charlotte came out firing on all cylinders to start the second stanza, but its efforts were stonewalled by Jarry. Following up some highlight reel stops from the first period, Jarry denied the Checkers with a handful of post-to-post saves early in the middle frame.

The tide turned in the Penguins’ favor when Checkers goalie Alex Nedeljkovic allowed a goal from center ice midway through the second period. Daniel Sprong flung the puck towards the Checkers’ cage, and with one dramatic hop, the puck skipped over the glove of Nedeljkovic and into the net, giving the Penguins a 2-0 lead.

The Checkers began an early onslaught of shots in the third period, and Aleksi Saarela finally solved Jarry with a sniper’s shot 6:32 into the final frame of regulation. Valentin Zykov tacked on a power play goal on Charlotte’s sixth man advantage of the game at 11:45 of the third period, tying the contest, 2-2.

The Penguins finished the third period with a flourish, peppering Nedeljkovic with shots. The second-year pro goaltender stood tall in the face of Wilkes-Barre/Scranton’s avalanche, and made enough saves to send the game to overtime.

Wallmark’s game-winner 3:18 onto the extra period established a 1-0 series lead for the Checkers in the best-of-five opening round series. Jarry finished the game with 35 saves, and Nedeljkovic posted 25 stops. Game Two takes place tomorrow night, Saturday, Apr. 21, at Bojangles’ Coliseum. The series will return to the Penguins’ home ice for Game 3 on Thursday, Apr. 26.

PENGUINS COME BACK TO FORCE OT, BUT LOSE TO WOLF PACK