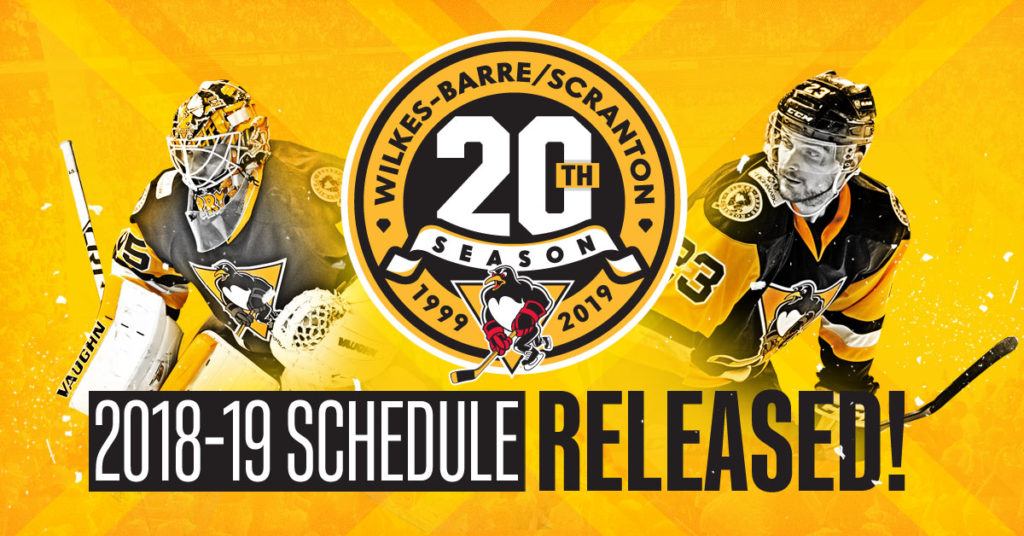 WILKES-BARRE, Pa. – The Wilkes-Barre/Scranton Penguins’ full 2018-19 schedule was released today by the American Hockey League, and the Penguins will play on weekend evenings or afternoons for 32 of their 38 home games during their 20th season.

Sync your online calendar with the schedule here  Stanza Calendar

As it was revealed on Tuesday, the Penguins will open their 20th season on Saturday, Oct. 6, when they face off with the Thunderbirds at Mohegan Sun Arena at Casey Plaza. They then quickly turn their attention to a road trip to Ohio for a two-game set with the Cleveland Monsters. The early-season road trip will be Wilkes-Barre/Scranton’s first visit to Cleveland since the 2008-09 campaign. The Monsters come to Northeastern Pennsylvania to play on the Penguins’ home ice twice during the season, once on Dec. 7 and the next time on Feb. 1.

For the second year in a row, the Penguins will revisit home-and-home series with three Western Conference foes, the Grand Rapids Griffins, Milwaukee Admirals and Rockford IceHogs. The Penguins’ longest stretch of road contests this season is five games from Nov. 4 – 14. Their longest homestand lasts only three games, which will occur three separate times during the season in January and twice in March.

Wilkes-Barre/Scranton will also participate in several games with unique start times this season. The Penguins will take the ice at Mohegan Sun Arena at Casey Plaza with the Phantoms at 1:05 p.m. on Martin Luther King, Jr. Day, Monday, Jan. 21, 2019. While on the road, the Penguins will have three different contests with puck drops scheduled before noon. On Wednesday, Nov. 14, Wilkes-Barre/Scranton will play Springfield at 10:35 a.m. at MassMutual Center. The Penguins also have 10:30 a.m. start times for showdowns with the Sound Tigers on Wednesday, Jan. 23 and Tuesday, Apr. 2 at Webster Bank Arena.