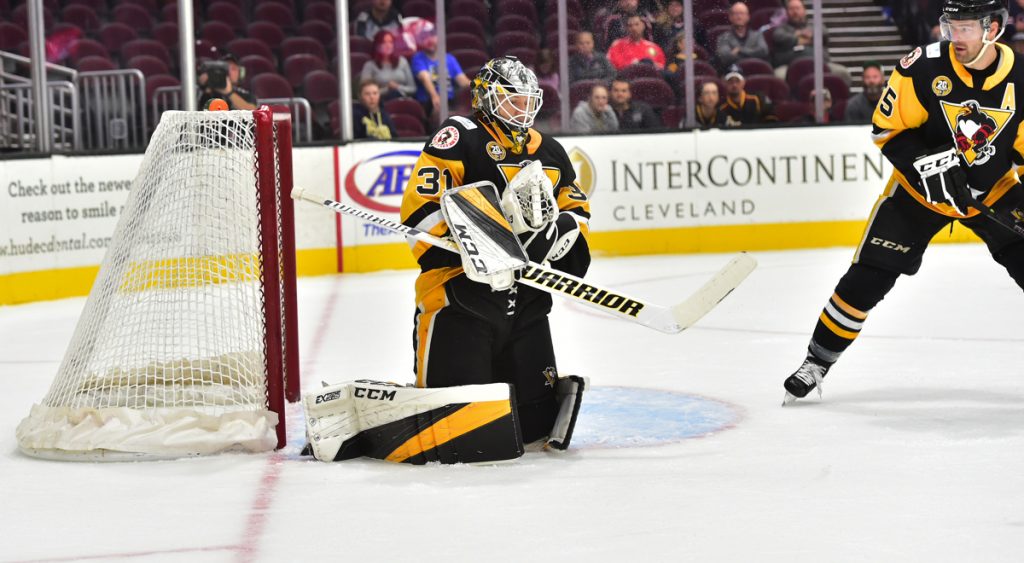 Cleveland had won its first three games of the season, but Wilkes-Barre/Scranton (2-0-0-0) utilized its special teams prowess and a lights out, 28-save performance from Anthony Peters to shut-out the Monsters in the two clubs’ first meeting since Feb. 11, 2009.

The Penguins struck first when Garrett Wilson tipped in a shot by Stefan Elliott at 6:48 of the opening frame. In addition to being Wilkes-Barre/Scranton’s first power play goal of the season, it marked Wilson’s first tally since being named captain of the Penguins.

Sam Lafferty used another man advantage marker at 6:15 of the second period to put the Penguins ahead, 2-0.

The Monsters thought they had mustered a response with a power play goal of their own midway through the second period, but Peters had other plans. After a redirected shot was initially stopped by Peters but the rebound caromed back into play, Cleveland’s Alex Broadhurst was staring at an open net before Peters flung out his left leg pad to keep the Monsters off the board.

Cleveland went to the penalty kill 11 times over the course of the game, and Wilkes-Barre/Scranton used its 10th power play to put the game away. Anthony Angello beat Jean-François Bérubé through the five-hole on that man advantage, giving the Penguins a commanding 3-0 lead with 5:17 left to play in the contest.

Peters and the Penguins’ penalty kill went a perfect six-for-six on the night, as well.

Wilkes-Barre/Scranton remains in Ohio for its next game, as the Penguins get another crack at the Monsters on Saturday, Oct. 13 at 7:00 p.m. The Penguins’ next home contest is Wednesday, Oct. 17 against the Hershey Bears.